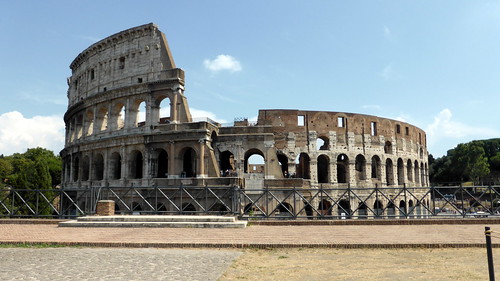 "Fortune thus blinds the minds of men when she does not wish them to resist her power."

It seems quite evident to many that the United States has been consumed by the same ambition and thus fate with that of the Roman Empire. That one of the most notorious periods in history for its extensive imperialism, corruption and barbaric slavery are the blueprint for what the founding fathers used in forming the moral constitution of the United States, and thus it has been rotten to its core from its very inception.

There is no doubt that the United States is acting in accordance with that of an empire presently.

It is true that the founding fathers of the United States were very much influenced by Rome, but for those who have some knowledge on the history of that titan of an era, they would know that Roman history consists of three phases; that of the kingdom, the republic, and the empire. The period of empire was its most corrupt and malevolent, but what defined Rome's characteristics before this? Was Rome actually something noble and honorable once? Which period were the founding fathers influenced and inspired by? Is the United States doomed to repeat the collapse of the Roman Empire? We will discuss all these questions here.

What Defined Rome before it Became an Empire?

Rome was founded in 753 BC as a kingdom, though much of the details around this partake in legend, suffice for our purposes here she was founded by Romulus who ruled until 717 BC. Numa Pompilius who would rule as king for the next 43 years, was a very wise king and founded the laws and governmental institutions that Rome would use for most of her existence. It should be noted that during this period, the kings were not chosen by bloodline but rather through a voting process by the senate, yes, there was already a senate formed during the period of kings.

Another interesting note is that during this period of Roman Kings (which consists of 7), never did they succumb to picking their own son for king but rather, starting with the 4th king (Ancus Marcius), he recommended to the senate that his 'adopted' son Tarquinius Priscus be chosen over his very own sons, which was supported by the senate vote. Though this showcased that the selection of a king was based more on merit than blood, for this very reason it would bring an end to the period of kings by invoking a terrible cycle of jealousy and infamy as we will see.

Tarquinius Priscus ruled for 37 years, until the sons of Ancus, who never forgave that Tarquinius should be chosen to rule over them, stabbed Tarquinius as an elder in an attempt to usurp the throne. It is said that Tarquinius was alive long enough to tell his wife that he supported Servius Tullius as king, and his wife then shouted the message from their palace window. Interestingly, once again the former ruling king had chosen an 'adopted' son over his own sons. Servius as a boy was raised amongst the royal sons, and he quickly excelled them and rose to become Tarquinius' favourite. Though Servius was known for shirking away from this favouritism, it only wounded the pride of Tarquinius' sons further, and to make matters unbearable, Servius had been born a slave which was thought to be a mark of inferiority.

Servius would become king and would rule 43 years until the day that his own daughter, whom he had marry to one of Tarquinius' sons (Superbus), conspired together to brutally murder Servius in his elder years in a terribly bloody public spectacle. Servius' body would then be run over by his daughter by horse carriage causing an even further grisly scene, and the street would be known afterwards as Vicus Sceleratus (street of shame, infamy). Superbus would earn his nickname, meaning 'proud' or 'arrogant' due to his refusal to bury the body of Servius. And Servius would be known as the last of the benevolent kings.

Tarquinius Superbus would rule for 26 years and would be the last of the kings. He, not surprisingly, was very unpopular with the Roman people and senate, ruling as a cruel despot. This hatred for Superbus would find its snapping point when one of Superbus' sons, Sextus raped a nobleman's wife, named Lucretia. Lucretia was so humiliated and felt so dishonored by this act that once she had relayed the message to a group of four high-ranking men she stabbed herself in the heart with a dagger. Junius Brutus was one of the men present during this scene, and Livy writes that as soon as Lucretia had committed suicide, Brutus rushed over to her, plucked the dagger out of her breast and raised it, swearing the end of the Tarquin kingship.

Junius Brutus was able to quickly organise a gathering within the city where he exhorted the Roman people to rise up against the tyrant king. The people would support this and vote for the deposition of Superbus and the banishment of him and his entire family. Brutus then proceeded to head, with an armed group of men, to the camped Roman military where he was received as a hero and supported in the decision to exile the Tarquin family.

Once the Tarquin family had been successfully banished, Junius Brutus would gather the people of Rome to swear an oath that they would suffer no man to rule Rome ever again, and as per Livy, the Roman people desirous of liberty would vow from that point on no longer to be swayed by the entreaties or bribes of kings.

A Republic is Born

It should be noted that though the rape of Lucretia is often credited as what caused the Roman people to rebel and never suffer a king again, as Machiavelli makes the point in his Discourses on Livy, it was not the isolated event of Lucretia's suicide that had caused the people to rebel, but the fact that Superbus had forsaken all law and had treated all of Rome with such dishonor that Rome would have been unrecognisable after a few generations under the Tarquins. If Superbus had been a just king, the crime against Lucretia would have been presented to him to act as judge over and he would not have been punished for the crime of his son, but this was not done. It was not done because it was known that Superbus had no respect for a law benefitting the general welfare of the people but rather only knew his own personal law, and this is what the people could no longer suffer under.

Related Topic(s): Citizens; History; Liberty; Military; Slavery, Add Tags
Add to My Group(s)
Go To Commenting
The views expressed herein are the sole responsibility of the author and do not necessarily reflect those of this website or its editors.