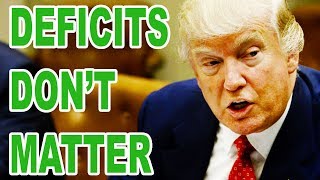 Most Republicans in Congress, along with the Republican president, supported tax cuts and increased spending, consequently raising the projected deficits for 2018 and 2019 by nearly $380 billion a year. This is an increase of almost 2 percent of GDP -- roughly the size of the stimulus pushed through by Barack Obama at the trough of the recession in 2009. That's real money.

There are grounds on which the merits of the tax cuts can be debated, although it does seem hard to justify giving still more money to the country's richest people. There are also arguments for the spending -- although the increases for the military, which got the majority of the additional spending, may be hard to justify.

But one thing is not debatable. The Republicans who supported this tax cut and additional spending do not place a priority on deficit reduction and balanced budgets.

While this deduction should be obvious, sort of like Kim Jong-un not being a big promoter of human rights, many in the media feel the need to tell us the opposite. There is a never-ending flow of articles telling us about how Republicans feel the "urgency" to reduce the deficit, or that they are not concerned about deficits created by the tax cut because they "embrace" the belief that the tax cut will pay for itself with additional growth.

There is one point that should be very clear by now: Republicans do not act like people who are concerned about budget deficits. Given the opportunity, they pursue policies that increase budget deficits. This is not just true in the present; it was also true when George W. Bush and Ronald Reagan were in the White House.

In each case, Republican administrations had large tax cuts which substantially reduced government revenue. While they did push through some cuts to spending on the domestic side, their increased spending on the military was more than offsetting.

In the prior two cases, and now under Trump, we see a huge expansion of the deficit. This is not behavior that is consistent with being concerned about large budget deficits or committed to balanced budgets.

But in spite of consistently supporting measures that raise budget deficits, perhaps in their heart of hearts, the Republicans all believe in balanced budgets. The correct response is: Who cares?

After all, maybe Kim Jong-un really is a very strong believer in the importance of human rights, he just happens to head a totalitarian regime that imprisons and executes people for arbitrary reasons. In the effort to understand the conduct of Kim Jong-un and North Korea, his innermost views about the importance of human rights really don't matter.

This rule is especially crucial in the case of politicians. After all, it is the job of a politician to convince people that they agree with them, even when they don't. This is how successful politicians get elected.

The problem of reporters telling us about people's motives and actual beliefs goes well beyond telling us about Republican politicians' concerns over budget deficits. Reporters do this all the time when they clearly are not in a position to know people's thoughts. The case of Republican deficit hawks, who continually act in ways that lead to higher deficits, is just a particularly egregious example.

I and others have argued that concerns about budget deficits are hugely overblown. Over the last decade, Washington's excessive concern with deficits prevented an adequate stimulus that could have employed millions of additional workers. As a result, lives were ruined and we needlessly lost trillions of dollars of output that could have gone to better housing, health care and improving the environment.

Unfortunately, the harm from excessive focus on the deficit is little recognized due to the poor quality of reporting on the topic. It would be good if the corporate media would drop silly moralizing about lower deficits somehow being good. Part of that change would be to stop making up stories about Republicans' commitments to balanced budgets.

Dr. Dean Baker is a macroeconomist and Co-Director of the Center for Economic and Policy Research in Washington, D.C. He previously worked as a senior economist at the Economic Policy Institute and an assistant professor at Bucknell University. (more...)
Related Topic(s): Deficit-funded Tax Cuts To Wealthy; Military; Republican Hypocrisy; Republican Party Budget Cuts, Add Tags
Add to My Group(s)
Go To Commenting
The views expressed herein are the sole responsibility of the author and do not necessarily reflect those of this website or its editors.