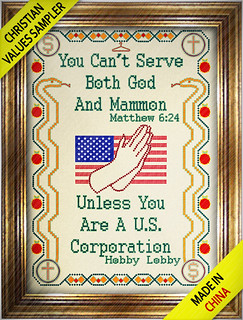 The air is full of allegations, exaggerations, misinformation, and justified outrage about the Supreme Court's rulings in the Hobby Lobby case. Here's mine: This case is just another of their attempts to change reality. (Remember Bush II when they actually did.)

Justice Alito says of the subject case, "according to their religious beliefs the four contraceptive methods at issue are abortifacients."

If they were, I could understand their reluctance to provide insurance to cover them. I, like many other Americans, hate abortion. Just like I wish there were no guns in the hands of mentally ill people, I wish there were no abortions. Neither is going to disappear any time soon.

But in scientific fact, these drugs are not abortifacients. They are contraceptives. This is not an ambiguous issue. These kinds of pills don't cause abortions. And according to the manufacturers, users, physicians, the research scientists who developed them, and any other normal human being capable of reading the bountiful written material on them, they are contraceptives.

But the court has tried to change reality by insisting that the prevailing science may be contradicted based on "strongly held religious beliefs."

This is simply not the function of a Supreme Court Justice even if they did appoint a president who wasn't elected by the people. That is, to deny scientific and medical reality and claim that to believe it devoutly somehow changes it.

Here's a thought experiment for you: Roman Catholics believe in transubstantiation; the communion wafer becomes the actual body and blood of Jesus Christ during the Mass.

How many of you Protestants, Jews and Muslims think that because a Roman Catholic believes in transubstantiation deeply, the communion wafer actually becomes the body and blood of Jesus? I thought so.

This move on the part of the Supreme Court has done a few terrible things to this country: It affirms the court's belief that they can change reality, a fact proven politically when they appointed George Bush II to the presidency in 2000. Now its opened the flood gates for religious exemptions as proven by the current lobbying efforts of some religious communities for more. And it has affirmed that corporations are not only people, but a special kind of people, who have a religion and exist above the laws of the land.

It's easy to get confused on issues like this because they hit us at the level of our core values and stir up our emotions. But make no mistake, my argument is not about the morality of abortion. It's about the willingness of the highest court in the land to attempt to redefine objective reality again, this time using religious belief as a measuring device.

When we lose our grounding in objective reality and replace it with the vagaries of religious fervor or political leanings, we are no longer a modern, first world country. We're moving backwards.

You don't believe me? Just check out how we compare to other modern countries on measureable criteria, not national bravado and bluster.

As a side note: It's interesting that the very people who claim to value their independence above all else are so willing to allow religious authorities to take it away.

As to respect for this ruling from the highest court in the land, Justice Kagan says, "Those who are bound by our decisions usually believe they can take us at our word, not so today." The court's action, Kagan added, even "undermines confidence in this institution." I add, even more than in 2000 with our first appointed president?

The sun will rise tomorrow as sure as autumn will follow summer. And no amount of religious fervor can change that objective physical reality any more than it can make contraception into abortion.

Related Topic(s): Abortion Legislation; Abortion Rights; Catholic; Corporations; Issues; People; Protestant; Reality; Religion; Women Issues Contraception, Add Tags
Add to My Group(s)
Go To Commenting
The views expressed herein are the sole responsibility of the author and do not necessarily reflect those of this website or its editors.