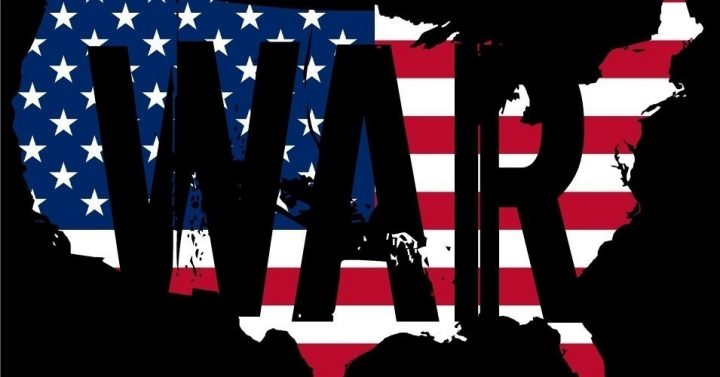 On June 13, President Donald Trump told the graduating class at West Point, "We are ending the era of endless wars." That is what Trump has promised since 2016, but the "endless" wars have not ended. Trump has dropped more bombs and missiles than George W. Bush or Barack Obama did in their first terms, and there are still roughly as many US bases and troops overseas as when he was elected.

Trump routinely talks up both sides of every issue, and the corporate media still judge him more by what he says (and tweets) than by his actual policies. So it isn't surprising that he is still trying to confuse the public about his aggressive war policy. But Trump has been in office for nearly three and a half years, and he now has a record on war and peace that we can examine.

Such an examination makes one thing very clear: Trump has come closer to starting new wars with North Korea, Venezuela, and Iran than to ending any of the wars he inherited from Obama. His first-term record shows Trump to be just another warmonger in chief.

First, let's look at what Trump inherited. At the end of the Cold War, US political leaders promised Americans a "peace dividend," and the Senate Budget Committee embraced a proposal to cut the US military budget by 50 percent over the next 10 years. Ten years later, only 22 percent in savings were realized, and the George W. Bush administration used the terrorist crimes of September 11 to justify illegal wars, systematic war crimes, and an extraordinary one-sided arms race in which the United States accounted for 45 percent of global military spending from 2003 to 2011. Only half this $2 trillion spending surge (in 2010 dollars) was related to the wars in Iraq and Afghanistan, while the US Navy and Air Force quietly cashed in a trillion-dollar wish list of new warships, warplanes, and high-tech weapons.

President Barack Obama entered the White House with a pledge to bring home US troops from Iraq and Afghanistan, and to shrink the US military footprint, but his presidency was a triumph of symbolism over substance. He won the 2009 Nobel Peace Prize based on a few speeches, a lot of wishful thinking, and the world's desperate hopes for peace and progress. But by the time Obama stepped down in 2017, he had dropped more bombs and missiles on more countries than Bush did, and had spent even more than Bush on weapons and war.

The major shift in US war policy under Obama was to reduce politically sensitive US troop casualties by transitioning from large-scale military occupations to mass bombing, shelling, and covert and proxy wars. While Republicans derisively dubbed Obama's doctrine "leading from behind," this was a transition that was already underway in Bush's second term, when he committed the United States to completely withdrawing its occupation troops from Iraq by the end of 2011.

Obama's defenders, like Trump's today, were always ready to absolve him of responsibility for war crimes, even as he killed thousands of civilians in air strikes in Afghanistan, Iraq, and Syria and drone strikes in Pakistan, Yemen, and Somalia, including the gratuitous assassination of an American teenager in Yemen. Obama launched a new war to destroy Libya, and the United States' covert role in the war in Syria was similar to its role in Nicaragua in the 1980s, for which, despite its covert nature, the International Court of Justice convicted the United States of aggression and ordered it to pay reparations.

Many senior US military and civilian officials deserve a share of the guilt for America's systematic crimes of aggression and other war crimes since 2001, but the principle of command responsibility, recognized from the Nuremberg principles to the US Uniform Code of Military Justice, means that the commander in chief of the US armed forces, the president of the United States, bears the heaviest criminal responsibility for these crimes under US and international law.

In January 2017, as Donald Trump prepared to take office, US forces in Iraq conducted their heaviest month of aerial bombardment since the "shock and awe" bombing during the US invasion of Iraq in 2003. This time, the enemy was the Islamic State (IS), a group spawned by the US invasion of Iraq and Obama's covert support for Al Qaeda-linked groups in Syria. Iraqi forces captured East Mosul from the Islamic State on January 24, and in February, they began their assault on West Mosul, bombing and shelling it even more heavily until they captured the ruined city in July. A Kurdish Iraqi intelligence report recorded that more than forty thousand civilians were killed in the US-led destruction of Mosul.

Trump famously summed up his policy as "bomb the shit out of" the Islamic State. He appeared to give a green light to the military to murder women and children, saying, "When you get these terrorists, you have to take out their families." Iraqi troops described explicit orders to do exactly that in Mosul. Middle East Eye (MEE) reported that Iraqi forces massacred all the survivors in Mosul's Old City.

"We killed them all," an Iraqi soldier said. "Daesh (IS), men, women, children. We killed everyone." An Iraqi major told MEE,

Related Topic(s): Anti-war; Obama; Pentagon; Trump Afghanistan Peace Deal; Trump And Iran; Trump And Saudi Arabia; Trump Dangerous; Trump Plan For Israel; Trump Warmonger; Wars, Add Tags
Add to My Group(s)
Go To Commenting
The views expressed herein are the sole responsibility of the author and do not necessarily reflect those of this website or its editors.