Unemployment figures released today show that more jobs were lost in 2008 than in any year since 1945. Think about that for a second.

A lightbulb should pop up – how did the United States avoid a major recession at the end of World War Two, when millions of servicemen returned to the civilian workforce, and there were massive layoffs as defense plants shut down?

One short little term saved us – the GI Bill.

Copyrighted Image? DMCA
Compare that to TARP. What are we getting from the $2.3 trillion being thrown at Wall Street? Have you tried to get a mortgage or car loan lately?

Something like the GI Bill is needed again. What we can’t do is pour more money down the rat-hole into big banks and huge, multinational corporations.


What was the GI Bill? Basically, beginning in 1944, the government financed returning soldiers purchase of homes, subsidized their higher education (GIs could attend school full-time and live modestly on the stipend provided), and handed out low-interest gov't backed small business loans. Everyone who couldn’t find a full-time job or school enrollment got a year’s worth of unemployment. That aid went to every discharged soldier, regardless of their credit scores – there was no Equifax then, and maybe we can do without it again.

What did the GI Bill do? 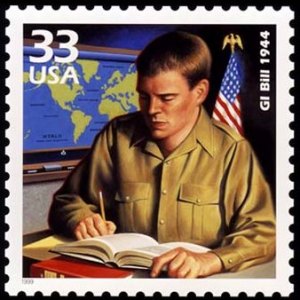 (Image by Unknown Owner)   Details   DMCA
• An important feature of the G.I. Bill was low interest, zero down payment home loans. This enabled millions of American families to move out of crowded urban apartments and into suburban homes. A burst of new construction kept the expected explosion in rents down, and provided employment.

• A second provision was the 52–20 clause. This enabled all former servicemen to receive $20 once a week for 52 weeks a year while they were looking for work. Eighty percent of the money set aside for the “52–20 Club” was never distributed, as most returning servicemen quickly found jobs or furthered their educations.

•   Another provision that made the GI Bill work was low-interest federal loans to small business.  The SBA was an integral part of the package, and essential to the self-employed and small firms.

The Second GI Bill followed the Korean War. Most of this was in the form of direct grants to veterans. By the end of the program in 1965 approximately 2.4 million of 5.5 million eligible veterans had used their benefits. 1.2 million had higher education and student living expenses paid, over 860,000 used the money for other education purposes, and 318,000 for occupational training. Over 1.5 million Korean Conflict veterans obtained home loans.
_______________________

Now, almost everyone agrees - that government stimulus package worked. We need to do something like it again - and, STOP THROWING TAXPAYER MONEY DOWN THE WALL STREET RATHOLE! That wasn't part of the GI Bill, as far as I can determine.

The Revenue Act of 1942 was the largest Federal tax increase in history and at the same time raised top rates and cut loopholes.(1)

With the enactment of two revenue-increasing acts in 1940, and one each in 1941, 1942, and 1943, and with the payment of greatly broadened income tax made easier and simpler by special legislation in 1943 and 1944, the job of war taxing and spending was largely completed by the end of 1945. But, the job of keeping the American economy running was not completed at that point. Marginal rates on upper incomes dropped only slightly during the next two decades, remaining at 91 percent on incomes over $400,000 until 1963.(2)

The true bottom-line is this: the GI Bill from WWII returned over 6-fold its cost to the Treasury in payroll taxes.  The pay-off from even the best hedge funds isn't even close to that.

Decline to p o q r s t u v w x y z answer this a b c d e f g h i j k l m n
Related Topic(s): Bail-out; Wall Street; Wall Street; Wall Street Bailout, Add Tags
Add to My Group(s)
Go To Commenting
The views expressed herein are the sole responsibility of the author and do not necessarily reflect those of this website or its editors.

A NEW GI BILL FOR EVERYONE - Instead of More Wall St. Bail-Outs