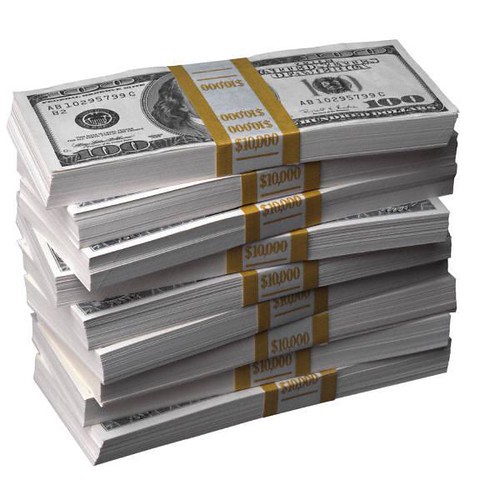 PILES AND PILES OF THIS KIND OF MONEY FILTERED TO SOLAR COMPANIES BY OBAMA. Need four more years of this waste of your tax dollars instead of small business loans that create REAL jobs?
(Image by roberthuffstutter)   Details   DMCA

The man knew what he wanted and went out and got it! Walked into a jungle and comes out at the age of twenty-one, and he's rich! - Willy Loman in Death of a Salesman

Show Me The Money!

Is it true that anyone living in America can get rich? A popular myth* promoted in everything from best-selling books to TV sitcoms says that it is. We are told that America is the land of endless opportunity, and anyone who works hard can come out of the jungle rich. There is even the suggestion by some that refusing the call to passionately pursue wealth is un-American.

The reality, however, is quite different. The promise of untold wealth - and the personal power that supposedly comes with it - is dangled like a carrot on a stick, enticing the aspiring rich to keep focused on reaching for something the already rich know full well is forever beyond their grasp. The myth, therefore, is part of an elaborate deception, a con.

While it's true that many people do rise above humble beginnings to attain a degree of wealth and social standing, it is not at the same level as the few who inhabit the mountain top. Even among the rich there is a wealth hierarchy, as evidenced by the disdain "old" money displays for "new" money.

The success and endurance of the myth and its associated con is based on embedding the idea that all one needs to be happy is lots of money. And while people will sometimes pay lip service to this not actually being true, no one actually buys into the transparent denial. And how can they in a culture that lusts after lifestyles of the rich and famous, and values wealth above all else?

Ironically, the Declaration of Independence originally contained the phrase, "Life, liberty and the pursuit of wealth". Why then was "happiness" substituted instead? Could it be the founders had a flash of insight, recognizing that while happiness could include wealth, it didn't exclude other definitions? It's unfortunate that for many, the original sentiment remains the only meaning.

But upon even just a cursory inspection, three fundamental flaws underpinning the scheme are exposed. First, the numbers themselves reveal that relatively few can ever actually achieve great wealth (apart from the fact that by global standards the average American is very well off). Most Americans have become aware of the 1/99 ratio of rich to not rich that represents the stark reality.

Second, not everyone is driven to become monetarily rich. As previously pointed out, there are those who have an entirely different definition of wealth and seek riches in other forms, such as art, knowledge, discovery, promoting a cause, the satisfaction of helping others, etc. Some even see earning money to live as a needless distraction from more important pursuits.

The third and most basic flaw in the myth gets to the very heart. There is a quote attributed to Author, David Mitchell: "Whoever dies with the most stuff wins". Whether it's stuff or money, this sums up the attitude of many regarding what they understand the purpose of existence to be. But why is that? Where is it written that the meaning of life is to become as rich as possible? On what stone? The Ten Commandments? The Bill of Rights? The Hollywood Walk of Fame?

Fact is, the closest we have to authoritative guidance on this issue comes from the world's great wisdom traditions (religion and philosophy), and what they have to say directly contradicts the myth's rationale. These traditions tell us that acquiring wealth is not the goal of human existence. Enlightened teachers from different times and cultures have emphasized this truth over and over. Along with iconic literary works, fine art and music, these wisdom traditions have cast light on the deepest needs and desires of the human soul.

The quest for material wealth is a misdirected attempt to obtain the most basic of human needs: love and security. The myth suggests that the need for love and security can be satisfied by having lots of money. However, this is based on two mistaken beliefs. First, by itself, being wealthy may induce admiration in some and idol worship in others, but it doesn't guarantee being genuinely loved by anyone. Second, it assumes that just having enough money can guarantee safety and security.

Related Topic(s): American Dream; Fear; Freedom; Happiness; Love; Meaning Of Life; Money; Power; Security; Truth, Add Tags
Add to My Group(s)
Go To Commenting
The views expressed herein are the sole responsibility of the author and do not necessarily reflect those of this website or its editors.