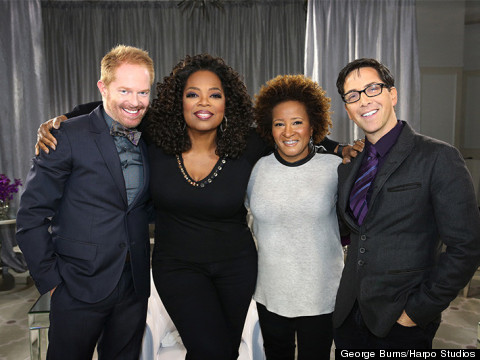 In the preamble of the Constitution, we are told that we are constantly moving toward a more perfect union. And while people in every age think they're living in a time of transition, ours truly is an age of transition when it comes to the rights of gay Americans. It's in the zeitgeist -- in the courts, in pop culture, in the business world and in people's voices online and offline. You can hear the echo of Frederick Douglass' truism: "Power concedes nothing without a demand. It never did and it never will."

While there is still much to be done, the entrenched power of the status quo that Douglass spoke of is indeed conceding: this week, New Jersey became the 14th state to allow gay couples to marry, and 57 percent of registered voters say they would support a law in their state allowing same-sex couples to marry.

Earlier this month, at Fortune's Most Powerful Women event in Washington, D.C., I had the chance to lead a public conversation with Roberta Kaplan, who played a key role in the shift in public opinion and policy that is helping speed along our collective journey toward a more perfect union.

"There's no question that, perhaps unlike any other movement in our nation's history, the pace of change, particularly within the last several years with respect to gay rights, has been dramatically rapid, and we really haven't experienced anything like this before," she said.

Kaplan is well qualified to speak about this change. A corporate lawyer, Kaplan entered the history books this past June by winning the United States v. Windsor case, in which the Supreme Court declared a key part of the Defense of Marriage Act unconstitutional in a 5-to-4 decision. It's worth pausing for a moment to recognize the momentousness of that decision, which will join the Emancipation Proclamation, the Civil Rights Act and the other big milestones in which America has come to terms with past injustices and taken actual legislative steps to say, in effect, "never again."

In case you need a refresher: after the death of her partner of more than 40 years, Edie Windsor was ordered to pay $363,000 in taxes because her marriage was not legally acknowledged. Kaplan took her case on, and United States v. Windsor was her first case before the Supreme Court.

While arguing the case, Kaplan told the Supreme Court justices, "I think with respect to the understanding of gay people and their relationships there has been a sea change."

Kaplan responded, "The fact of the matter, Mr. Chief Justice, is that no other group in recent history has been subjected to popular referenda to take away rights that have already been given or exclude those rights, the way gay people have."

The sea change Kaplan described has been fueled, in large part, by storytelling. We've never had so many tools at our disposal to bear witness. More than 50,000 people around the world -- from President Obama and Hillary Clinton to Suze Orman and Ellen DeGeneres -- have created "It Gets Better" videos, giving hope to LGBT youth. At HuffPost, our Gay Voices section has put the spotlight not only on instances of inequality but on examples of people working to make a difference and improve the lives of LGBT people. Like the grandfather who wrote a passionate letter to his daughter -- who had kicked her gay son out of the house after he came out of the closet -- calling her out for the "hurtful, narrow-minded and backward" behavior she was deploring in her son.

Earlier this year, our Gay Voices team collected stories about LGBT families and relationships in a series called "A Day in a Queer Life," documenting the struggles, joys, triumphs, setbacks, hopes and desires of LGBT people around the world, in collaboration with HuffPost's international editions in Canada, France, Italy, Spain and the UK.

As Marcello Signore wrote from Italy, "Sometimes I feel like Harry Potter in a world full of Muggles. In my country, Italy, I talk about creating a family while our parliament is still debating whether there should be a law against homophobia."

On Sunday, starting at 9 p.m. ET, the Oprah Winfrey Network is featuring a lineup of programs about being gay in America. It begins with Oprah's Next Chapter -- with conversations between Oprah and gay celebrities including Wanda Sykes, Jesse Tyler Ferguson and Dan Bucatinsky -- and continues with the premiere of Bridegroom, a documentary from Designing Women creator Linda Bloodworth-Thomason.

As we continue our journey toward a more perfect union, I hope you'll be part of the conversation. Please tune in tonight on OWN, and as always, use the comments section to let us know what you think.

Arianna Huffington is the co-founder and editor-in-chief of The Huffington Post, a nationally syndicated columnist, and author of thirteen books. She is also co-host of "Left, Right & Center," public radio's popular political roundtable program, as (more...)
Related Topic(s): LGBT; Zeitgeist, Add Tags
Add to My Group(s)
Go To Commenting
The views expressed herein are the sole responsibility of the author and do not necessarily reflect those of this website or its editors.

"Slightly Above Zero": A Slogan for Our Age of Diminished Expectations

The Media Gets It Wrong on WikiLeaks: It's About Broken Trust, Not Broken Condoms

Mitt Romney Brazenly Lies and the Media Lets Him Slide

2011: The Year the Power Went Off in Washington

Postcard From Greece: This Should Not Be About Austerity, It's About The Future Of Democracy