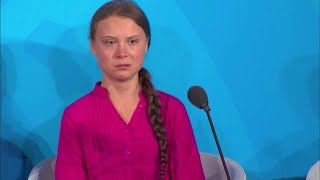 This was the chant of thousands of demonstrators, most of them under 20 years of age, as they marched through New York City on 23 September 2019. At about the same time, millions of other young people were demonstrating across the globe: in Australia, India, South Africa, Uganda, Bolivia, throughout Europe, and a lot of other places as well. They were all doing so as part of a youth movement to save the planet from the fate of global warming. The whole phenomenon had the feel of a modern day children's crusade.

The head of this children's crusade is a 16 year old girl, Greta Thunberg from Sweden. As one CNN reporter put it, Thunberg is an "old soul" in the body of a young girl -- she might be seen as a Joan of Arc reincarnated. Sometimes she speaks quietly and intelligently (her English is very good). Sometimes the anger and resentment pent up within her comes out in the form of melodramatic scolding. Either way, she is remarkably straightforward about what led her to begin this crusade: she suffered an episode of debilitating depression at age 11, apparently caused by the conviction that adults were destroying the planet and her future prospects along with it. She decided that "if you adults don't give a damn about my future, then I won't either." That translated into an intermittent refusal to go to school.

Then she witnessed American students walking out of their high school following the 2018 Parksville mass shooting -- the beginning of a student movement (which is now ignored by most of the U.S. media) against gun violence. Thunberg drew inspiration from this walkout and sat herself outside the Swedish parliament with a demand that Sweden take immediate measures to meet its carbon cutting obligations under the Paris accords. She refused to go away or compromise. Then, using the internet, she managed to turn her personal school strike for climate change into a worldwide series of rallies and protests.

It is a remarkable, heartwarming story. However, can Thunberg's audacious call for a worldwide school strike occurring every Friday ("Friday for the Future") possibly work? Let's consider the possibilities both positive and negative.

First, on the "what might make it possible" side. There is the fact that, at least in the West, children through their teens tend to be rebellious and if they are going to "cut" school it will probably be on a Friday. Maybe Thunberg can tap into and focus this rebelliousness. Also, most teens have very few economic responsibilities. If some of them deviate from the educational norm there are not a lot of dependents to greatly suffer. In addition, there is the fact that the modern rationale behind mandatory education is preparation to enter into an economic system that potentially provides personal wealth and, at least in theory, a meaning to life. Perhaps Thunberg can convince millions of teens that a viable economic system will not be there for them unless there is radical change and, thus, the rationale for going to school can be called into question. And finally, if she can do all of this, will the result be sufficient pressure to move policy makers in the direction she and her followers desire? There is something about Greta Thunberg's determination and, for lack of a better word, fire, that suggests she has a shot.

Then there is the "what makes it really unlikely" side. In many places teenagers do not vote, even when eligible. For instance, in the U.S. the voting age for national elections is 18. However, on average, recent turn outs for 18 to 24 year olds has been under 20 percent. Referencing the chant, "you had your future, and so should we," it turns out that many of the world's leaders, supported by too many of their bigoted, ignorant or just uncaring citizens, are quite practiced at ruining other people's future prospects.

Modeled by the policies of President Trump, millions of minorities, refugees, migrants, visa-reliant international students and the like are having their futures ruined every day. Specifically referring to the issue of global warming, the current leadership in the United States simply denies that Thunberg's claims are real. Her appeal to science does not move them. Poor countries, whose citizens see themselves as deprived of a decent present by past, as well as persisting, economically exploitive Western policies, see their future hopes in development policies that can only exacerbate global warming. And, as the insightful Ms Thunberg notes, most really don't give a damn for her, or anybody else's future. They can't see beyond their own lifetime.

Even now the children's crusade is finding that sweet reason gets them nowhere and they will have to commit themselves to civil disobedience. Those who believe the future has been stolen from them will challenge the laws that demand us all to follow rules and regulations that reflect bureaucratic processes and traditional power relations. No doubt those rules will continue to be enforced by authorities whose attention is rooted in the immediate present. This will be done even as select leaders listen politely to young folks like Thunberg. Thus, as she angrily addressed a gathering of leaders at the United Nations on 23 September, telling them "you are failing us" -- "us," here, meaning her generation -- police in Washington D.C. went about the business of arresting young people clogging the streets and grid-locking traffic. It is an evolving test of wills and endurance.

It should also be a balancing act. Thunberg is being driven to disrupt the processes of present society for the sake of future civilization. Yet the livability of our future is not only dependent on a sustainable climate (and I have no doubt that that climate is at risk). It is also dependent on the sometimes frustrating nature of the democratic processes and laws Thunberg must now challenge. It is a tightrope walk, for the rule of law is what sustains a livable political climate. It would be a real achievement if her crusade showed at least an intellectual awareness of this dual nature of our livable future -- an awareness that is often beyond the understanding of self-obsessed adults.

Yet, this is wishing thinking. Chances are that, as time goes by, the kids who stick with Thunberg will be forced into ever more provocative civil disobedience. But, if history is any guide, most of her followers will not go that far. They will drift away and, disgruntled, go back to school.

Related Topic(s): Children Teens; Climate; Crusades; Greta Thunberg Teenage Swedish Environmental Leade; Students; Worldwide, Add Tags
Add to My Group(s)
Go To Commenting
The views expressed herein are the sole responsibility of the author and do not necessarily reflect those of this website or its editors.