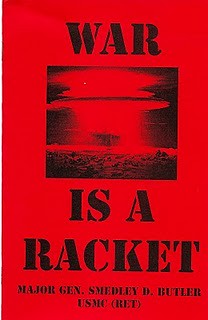 War is a Racket
(Image by earthlightbooks)   Details   DMCA

Whereas part of helping alleviate the refugee crisis should be ending, not escalating, wars that create refugees [iii],

Whereas President Trump himself admits that the enormous military spending of the past 16 years has been disastrous and made us less safe, not safer [iv],

Whereas fractions of the proposed military budget could provide free, top-quality education from pre-school through college [v], end hunger and starvation on earth [vi], convert the U.S. to clean energy [vii], provide clean drinking water everywhere it's needed on the planet [viii], build fast trains between all major U.S. cities [ix], and double non-military U.S. foreign aid rather than cutting it [x],

Whereas a December 2014 Gallup poll of 65 nations found that the United States was far and away the country considered the largest threat to peace in the world [xii],

Whereas a United States responsible for providing clean drinking water, schools, medicine, and solar panels to others would be more secure and face far less hostility around the world,

Whereas our environmental and human needs are desperate and urgent,

Whereas the military is itself the greatest consumer of petroleum we have [xiii],

Whereas economists at the University of Massachusetts at Amherst have documented that military spending is an economic drain rather than a jobs program [xiv],

Be it therefore resolved that the ____________ of ___________, ________, urges the United States Congress to move our tax dollars in exactly the opposite direction proposed by the President, from militarism to human and environmental needs.

[ii] This does not include another 6% for the discretionary portion of veterans' care. For a breakdown of discretionary spending in the 2015 budget from the National Priorities Project, see click here

[iii] "43 Million People Kicked Out of Their Homes," World Beyond War, ldbeyondwar.org/43-million-people-kicked-homes / "Europe's Refugee Crisis Was Made in America," The Nation, click here

[vi] "The World Only Needs 30 Billion Dollars a Year to Eradicate the Scourge of Hunger," Food and Agriculture Organization of the United Nations, .fao.org/newsroom/en/news/2008/1000853/index.html

[ix] "Cost of High Speed Rail in China One Third Lower than in Other Countries," The World Bank, click here

[x] Non-military U.S. foreign aid is approximately $25 billion, meaning that President Trump would need to cut it by over 200% to find the $54 billion he proposes to add to military spending

David Swanson is the author of "When the World Outlawed War," "War Is A Lie" and "Daybreak: Undoing the Imperial Presidency and Forming a More Perfect Union." He blogs at http://davidswanson.org and http://warisacrime.org and works for the online (more...)
Related Topic(s): City Council; Military; Resist Trump; Resistance; Resisters; Resolution 1441, Add Tags
Add to My Group(s)
Go To Commenting
The views expressed herein are the sole responsibility of the author and do not necessarily reflect those of this website or its editors.