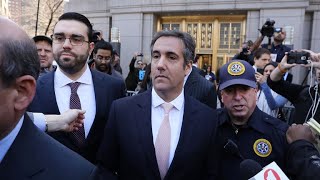 People who have worked as prosecutors and investigators tend to agree: Everyone has a breaking point. That's what former FBI Assistant Director Frank Figliuzzi told MSNBC's Nicolle Wallace Wednesday. In his experience, even when he was investigating organized crime figures or drug cartel leaders, "Eventually they have a breaking point."

In Figliuzzi's estimation, Cohen is no different and he's currently on that very path given the staggering amount of trouble he's in.

Michael Avenatti, the lawyer for Stormy Daniels, has advanced that notion ever since he arrived on our TV screens a couple months ago. And now, with Cohen's damning pay-to-play scheme at least partially exposed, we are starting to get a taste of just how deep he's in.

Imagine Cohen watching this unfold in real time, largely isolated, as Trump and his hatchet man Rudy Giuliani repeatedly undercut Cohen's entire defense. Vanity Fair's Emily Jane Fox has a window into what that was like for Cohen as the weekend news shows hashed out the millions of dollars that flowed through his shell company, Essential Consultants LLC, for zero work. Cohen was in Philadelphia last weekend to watch his daughter's college graduation.

"As his instinct to fight kicked into overdrive last week, so too has the unyielding cable-news mania weighed on him. The paparazzi, who had finally begun to leave him and his family alone after the raid, once again started lingering outside of his hotel on Park Avenue. They followed him on his way to his lawyers' office, and waited for him once he came outside. Friends continued to tell him that, at this point, no one in Washington was looking out for him, so he had to be the one to look out for himself and his family. As he watched the news unfold in his hotel room in Philadelphia over the weekend, he evidenced some exasperation. He has confided in friends, 'I just can't take this anymore.'"

Related Topic(s): Crime; Michael Cohen; Over-exposure, Add Tags
Add to My Group(s)
Go To Commenting
The views expressed herein are the sole responsibility of the author and do not necessarily reflect those of this website or its editors.