In 1997 the film Wag the Dog debuted to rave reviews. The dark comedy concerns a Washington, DC spin doctor and a Hollywood producer who fabricate a fictional war in Albania to distract American voters from a presidential sex scandal. Many observers couldn't help but draw parallels between the film and the real-life events of 1998-99, which included the Monica Lewinsky scandal, Clinton's impeachment and a very real war brewing in the Balkins 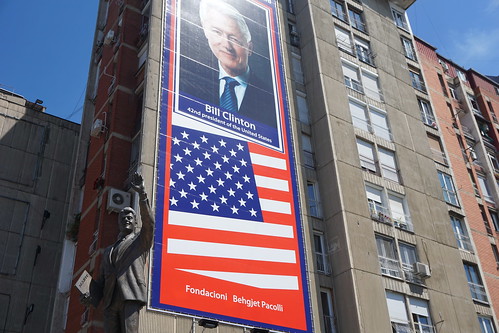 March 2019 was the 20th anniversary of Operation Allied Force, NATO's 78-day air war against Yugoslavia. It was a war waged as much against Serbian civilians hundreds of whom perished as it was against Slobodan Milošević's forces, and it was a campaign of breathtaking hypocrisy and selective outrage. More than anything, it was a war that by President Bill Clinton's own admission was fought for the sake of NATO's credibility.

Our story begins not in the war-torn Balkans of the 1990s but rather in the howling wilderness of Afghanistan at the end of the 1980s as defeated Soviet invaders withdrew from a decade of guerrilla warfare into the twilight of a once-mighty empire. The United States, which had provided arms, funding and training for the mujahideen fighters who had so bravely resisted the Soviet occupation, stopped supporting the jihadis as soon as the last Red Army units rolled across the Hairatan Bridge and back into the USSR. Afghanistan descended deeper into civil war.

The popular narrative posits that Osama bin Laden and his al-Qaeda network, Washington's former mujahideen allies, turned on the West after the US stationed hundreds of thousands of infidel troops in Saudi Arabia home to two out of three of Sunni Islam's holiest sites during Operation Desert Shield in 1990. Since then, the story goes, the relationship between the jihadists and their former benefactors has been one of enmity, characterized by sporadic terror attacks and fierce US retribution. The real story, however, is something altogether different.

In 1997 the film Wag the Dog debuted to rave reviews. The dark comedy concerns a Washington, DC spin doctor and a Hollywood producer who fabricate a fictional war in Albania to distract American voters from a presidential sex scandal. Many observers couldn't help but draw parallels between the film and the real-life events of 1998-99, which included the Monica Lewinsky scandal, Clinton's impeachment and a very real war brewing in the Balkans. As in Wag the Dog, there were exaggerated or completely fabricated tales of atrocities, and as in the film the US and NATO powers tried to sell their war as a humanitarian intervention. An attack on Yugoslavia, we were told, was needed to avert Serb ethnic cleansing of Albanians.

There were two main problems with this. First, there was no Serb ethnic cleansing of Albanian Kosovars until after NATO began mercilessly bombing Yugoslavia. The German government issued several reports confirming this. One, from October 1998, reads, in part:

The violent actions of the Yugoslav military and police since February 1998 were aimed at separatist activities and are no proof of a persecution of the whole Albanian ethnic group in Kosovo or a part of it. What was involved in the Yugoslav violent actions and excesses since February 1998 was a selective forcible action against the military underground movement (especially the KLA)" A state program or persecution aimed at the whole ethnic group of Albanians exists neither now nor earlier.

Related Topic(s): Bill Clinton; Bosnia And Herzegovina; Bosnian War; Kosovo; Madeleine Albright; NATO; President George Bush, Add Tags
Add to My Group(s)
Go To Commenting
The views expressed herein are the sole responsibility of the author and do not necessarily reflect those of this website or its editors.