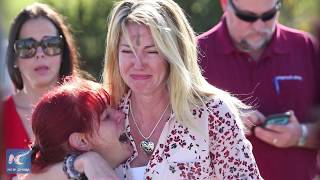 "Childhood," said the poet Edna St. Vincent Millay, "is the kingdom where nobody dies."

In this country, childhood is something we no longer value.

As of this writing, 17 people are dead at a high school in Broward County, Florida. The shooter used an AR-15 semiautomatic weapon. Its manufacturer's sales reps call it "America's rifle."

They have a point. It is an immensely popular weapon. As an NBC News report explains, Americans own an estimated 15 million AR-15s. One in five guns sold in the United States is an AR-15-style weapon. As of December 17 of last year, there were more than 1.7 million images uploaded to Instagram with the #ar15 hashtag.

AR15s are designed for mass killing, firing bullets at high speed to inflict maximum damage. As a doctor (and AR-15 owner) tells NBC: "The higher muzzle-velocity projectiles, if they strike an organ, you're much more likely to have severe bleeding and dying ..."

One of the weapon' designers called it "maximum wound effect." It's a one-way ticket out of childhood's kingdom.

But Rubio and his fellow Republicans brought this day around with their opposition to common-sense gun control legislation. Rubio has accepted millions from the gun industry, and said today that the shooting was "inexplicable."

Rubio is living proof of Upton Sinclair's observation that "It is difficult to get a man to understand something, when his salary depends upon his not understanding it."

Except that it is his political contributions, not his salary, that are at stake. And Sinclair was speaking about ordinary corruption, not the kind that kills children.

Wall Street Journal reporter Ted Mann described the scene in a Connecticut firehouse, when parents of Sandy Hook kindergartners learned they would not be seeing their children alive again:

"The governor walked into the center of the room, and began speaking so softly, Mr. Occhiogrosso said, that one man called out to ask him to raise his voice.

"If you haven't been reunited with your loved one by now," Mr. Malloy said, "that is not going to happen."

The room exploded in wailing and tears, the officials said. Mr. McKinney, who had waited outside the door when Mr. Malloy went in to deliver the news, heard the cries from the hallway.

Related Topic(s): Death; Disasters; Killed; Schools; Shootings; Students, Add Tags
Add to My Group(s)
Go To Commenting
The views expressed herein are the sole responsibility of the author and do not necessarily reflect those of this website or its editors.