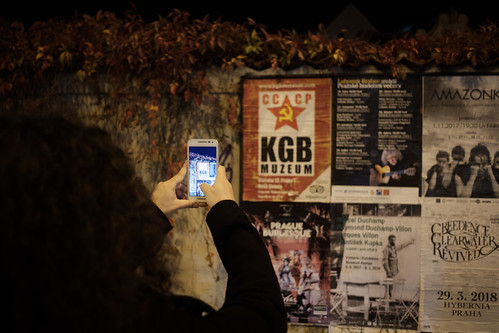 Putin's People: How the KGB Took Back Russia and Then Took on the West, is one of several anti-Russia books being turned out by the publishing industry in the U.S. during a presidential-election year. Given that it takes on average 18 months from submission of a completed manuscript by an author for a book to be available for sale to the public, it appears that these books are being expedited through the publishing pipeline.

Contrast that with what journalist Aaron Mate said recently on Twitter about his inquiry into the possibility of publishing a book based on his accurate Russiagate reporting:

It's incredible to see book after book churn out the same discredited Russiagate hype. When I talked to an editor at a major publisher about doing a book -- you know, based on actual facts -- they told me their friends would be mad at them if they published it, so that was it.

The traditional publishing industry in the U.S. is, in many ways, an extension of the corporate mainstream media. Consequently, it suffers from many of the same problems. Due to the decades-long trend of corporate consolidation, there are now only 5 major publishing companies and their myriad subsidiaries. Most of the editors who work at these publishing houses based in New York - as well as the agents who serve the industry - tend to know each other. Moreover, these publishing-industry professionals are culturally part of the educated professional class that gives credibility to what The New York Times and CNN report, regardless of how poor and sloppy that reporting has become over the past 20 years.

This is the context in which Catherine Belton, a former journalist for the Financial Times who was based in Moscow from 2007 to 2013, has had her book published in the U.S. by a subsidiary of MacMillan. She has also had extensive coverage of Putin's People appear in major corporate-media outlets, including the New York Times, as well as glowing reviews by the mutual-admiration society of Russia-hawk writers like Anne Applebaum, Luke Harding, Edward Lucas, Peter Pomerantsev, et al. Applebaum in particular can always be counted on to use her platform to promote books that depict Putin as evil and Russia as the hopeless armpit of the world, such as she did in 2014 when she promoted the late Karen Dawisha's poorly substantiated claims in Putin's Kleptocracy.

A lot of the claims made by Dawisha are recycled in Belton's book, but with an even more diabolical twist. Belton's prologue provides a preview of the basic storyline of Putin's People and her thesis is summed up in its final page:

Parts of the KGB, Putin among them, have embraced capitalism as a tool for getting even with the West. It was a process that began long before, in the years before the Soviet collapse. (p. 16)

Putin's People is an attempt to weave all the strands of the anti-Russia propaganda narrative into a coherent whole: Putin is a corrupt autocrat who has created a kleptocracy. His main purpose, however, is not just to undermine or prevent the development of democracy in Russia. His purpose, according to Belton, is to destroy western democracy in the U.S. and Europe and he has been working continuously with his circle of KGB comrades from St. Petersburg to implement this nefarious project ("the KGB plot") since the late days of the Cold War.

Putin has apparently done this because his KGB mentality is such an overwhelming and immutable feature of his psyche. Indeed Putin is portrayed throughout the book as a sinister automaton, making virtually every move based on furtherance of "the KGB plot" and his own personal enrichment. Nothing else in Putin's life has influenced him outside of his KGB experience. His family's tragic experience during WWII, his study of international law, his decades-long embrace of martial arts as both a philosophy and a sport, and the post-Soviet policies followed by the US-led west toward Russia are all either dismissed or non-existent in Belton's depiction of Russia's president and his governance.

Needless to say, to most people who have any real knowledge or on-the-ground experience with Russia, Belton's thesis sounds far-fetched. Such a major claim about the world's other nuclear superpower and its leadership should require major substantiation to back it up. Unfortunately, the book does not deliver.

Of the 1,735 reference notes listed at the end of the book, 1 of 6 is an unnamed source. Even more disturbing is the fact that these unnamed sources often provide the only foundation for her most bombshell claims.

In the opening chapter, Belton discusses Operation Luch. This is the official name of the above-described plan hatched by "progressive" elements within the KGB in the final days of the Soviet Union whereby they sought to build up a capitalist system and then use it to undermine the west.

The "progressives" in the KGB, according to Belton, were influenced by Yury Andropov's desire to modernize. These particular KGB agents - as well as other reformers, such as Mikhail Gorbachev - were mostly educated at the Institute for World Economy started by Andropov, which taught that a transition to a market economy was the solution to the country's stagnation and the only way to compete with the west. This contrasted with the traditionalists who fought against any such changes. Belton later describes how the KGB developed the capitalist system in the early stages that they would eventually use against the west as follows:

Related Topic(s): Kremlin; Media; Propaganda; Putin; Russia, Add Tags
Add to My Group(s)
Go To Commenting
The views expressed herein are the sole responsibility of the author and do not necessarily reflect those of this website or its editors.