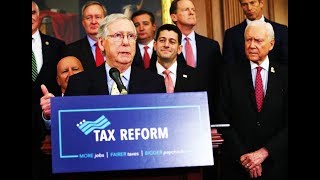 Tax cuts for the rich and tax hikes for everyone else are dangerously close to becoming law.
(Image by YouTube, Channel: The Young Turks)   Details   DMCA

Here are the three main Republican arguments in favor of the Republican tax plan, followed by the truth.

1. It will make American corporations competitive with foreign corporations, which are taxed at a lower rate.

(1) American corporations now pay an effective rate (after taking deductions and tax credits) that's just about the same as most foreign based corporations pay.

(2) Most of these other countries also impose a "Value Added Tax" on top of the corporate tax.

(3) When we cut our corporate rate from 35% to 20%, other nations will cut their corporate rates in order to be competitive with us -- so we gain nothing anyway.

(6) American corporations already have more money than they know what to do with. Their profits are at record levels. They're using them to buy back their shares of stock, and raise executive pay. That's what they'll do with the additional $1 trillion they'll receive in this tax cut.

2. With the tax cut, big corporations and the rich will invest and create more jobs.

(1) Job creation doesn't trickle down. After Ronald Reagan and George W. Bush cut taxes on the top, few jobs and little growth resulted. America cut taxes on corporations in 2004 in an attempt to get them to bring their profits home from abroad, and what happened? They didn't invest. They just bought up more shares of their own stock, and increased executive pay.

(2) Companies expand and create jobs when there's more demand for their goods and services. That demand comes from customers who have the money to buy what companies sell. Those customers are primarily the middle class and poor, who spend far more of their incomes than the rich. But this tax bill mostly benefits the rich.

Related Topic(s): Disgrace; Republican Lies; Republican Tax Plan; Workers, Add Tags
Add to My Group(s)
Go To Commenting
The views expressed herein are the sole responsibility of the author and do not necessarily reflect those of this website or its editors.