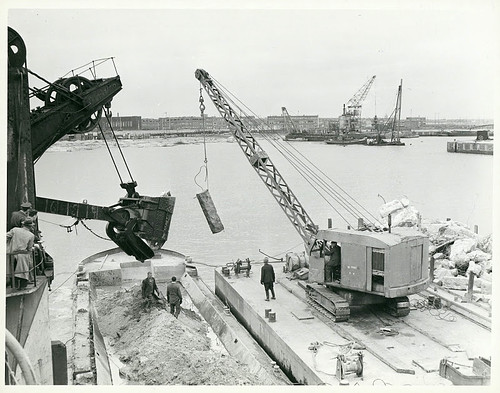 In late 1948, my ship, the USS Siboney: CVE-112, captained by the late C.B. Jones, was delivering agricultural supplies and equipment to Turkey and North Africa... I did shore patrol and was the Captain's jeep driver while we were in port. Our country had been on the winning side in World War 2 and we were extending the hand of friendship to our global neighbors, including our former enemies. We were greeted by their people's smiles, cheers and handshakes in return, while Capt. Jones and his officers dined with their leaders.

The Marshall Plan was signed into law by Pres. Harry Truman on April 3, 1948. He appointed Secretary of State Ret. Gen. George Marshall to administer it. This approach to foreign policy was later proposed on a global scale by Mr. Gore in his book Earth in the Balance, (1992), One vote by one Supreme Court Justice in 2000 placed Mr. Gore's opponent (who lost by 583,895 popular votes according to Wikipedia) in the White House and our dreams of peace and friendship died on the plains of Iraq.

Our Framers aimed at strong but peaceful intercourse with our global neighbors. Our treaties, our military policies and actions and our participation in global projects should all be aimed at establishing and maintaining peaceful relationships. The text of our Constitution supports this view. It gives Congress the sole power to declare war. The stated intent of the framers was to keep the presidency as far removed as possible from any decisions having to do with the commencement or continuation of hostilities. [1] The "father" of our Constitution (Madison) called this its wisest feature. The presidency was to do the routine negotiation of treaties under the substantive supervision of the Senate. After all, treaties can lead to either peace or war. Questions of peace and war belong with Congress: the "people's branch."

Yet our presidency has now gained virtually absolute control over both our war and treaty powers. As recently as the late 1940's this was not the case. In those days the executive could propose but only Congress could approve. One result was a diplomatic triumph the Marshall Plan. We extended the hand of friendship to our recent enemies and, for a time, earned the esteem and trust of many throughout the world.

About the Marshall Plan

Nine months after "Little Boy" was dropped on Hiroshima, Congress authorized the Marshall Plan. During these nine months the US had already begun giving assistance to some of the countries devastated by World War II. In those early post-war days, our wartime ally, the USSR, played a part in providing this assistance. For example, it shipped quantities of wheat to France. It now appears that, in 1947, we had an opportunity to establish a cooperative relationship with the USSR based on our joint participation in the Marshall Plan. However, we set conditions to Soviet participation that guaranteed its refusal. In this way, we lost an opportunity to foster international cooperation.

During the four years of the Plan's existence, we donated $13 billion in economic aid. [2] We also established "counterpart funds" that loaned capital to private enterprises. Much of the money provided under the Plan was spent to purchase US goods - thus helping create our own post-war prosperity. The Marshall Plan was a textbook case of "enlightened self-interest." While the Marshall Plan would prove to be beneficial to the United States in terms of both our economy and world opinion, the fact remains that at that time our Congress was willing to commit substantial funds to peaceful purposes.