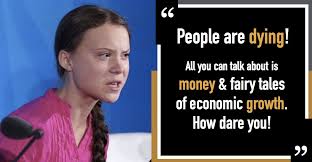 Were you inspired by Greta Thunberg? I couldn't get over her courage.

Imagine: a child of 16 years suddenly thrust beneath the blinding spotlight of the world's stage speaking confidently with a pope and with heads of state, addressing huge crowds and the United Nations itself. All of that would frighten me. How about you?

And she called them all to task. "How dare you!" she repeated again and again to the world's movers and shakers whose programs for addressing climate change fell far short of the goals set by climate scientists. "Don't listen to me," she repeated; "listen to the scientists." In other words, align yourselves with what Mother Nature, Life Itself, and the Universe are telling us.

And, of course, you saw the effects of her audacity. Millions were mobilized across the planet.

What started as a one-girl protest before the Swedish parliament swiftly became a thing.

Youngsters everywhere, including my own grandchildren, walked out of class and imitated Greta's defiance. My five-year-old grandson challenged us all for driving a Volvo van whose gas engine, he said, is destroying the environment. "We should be driving an electric car instead" he objected. A five-year-old!

As someone pointed out, it's a "Children's Crusade" against capitalism's worship of Moloch.

And what fear it inspired in the powerful! This wisp of a girl exercising the super-powers of concentration and focus conferred by an Asperger's condition that would have others hiding under a rock, suddenly had the movers and shakers shaking with fear. Some ganged up on her, attacked her parents, and even belittled the teenager as mentally deficient. Their cowardly desperation showed that they were more afraid of her than she of them.

All of that is relevant to today's liturgy of the word. It's about prayer understood as Greta- Thunberg-like alignment with Life's processes. Regardless of what we might call it, such re-orientation can change the world and cause powerful enemies of justice to tremble even before those they see as the weakest among us.

More specifically, today's readings trace biblical understandings of prayer from a voodoo-like practice intent on harming one's enemies to the alignment with Life's purposes just described. Here's the way they run according to my own "translation." Judge for yourself to see if I've got them right. You can read the originals here.

Long ago
When Israel's primitive faith
Still pictured God
As a Man O' War,
They magically imagined
A Yahweh persuaded
To slaughter their enemies
By Moses' adoption
Of Wiccan postures,
Magic rocks
And feats of
Super-human endurance.

They were right,
Of course,
To intuit
That the Creator
Is eternally helpful
In protecting
The lives
And chosen paths
Of his creatures
Providing sunlight by day
And moonlight by night.
Divine power
Is always disposed
To help
The oppressed.

Related Topic(s): Climate; Environment; Environmentalism; Environmentalist; Faith; God; Jesus; Justice; Moses; Parable; (more...) Prayer; Sunday, Add Tags  (less...)
Add to My Group(s)
Go To Commenting
The views expressed herein are the sole responsibility of the author and do not necessarily reflect those of this website or its editors.