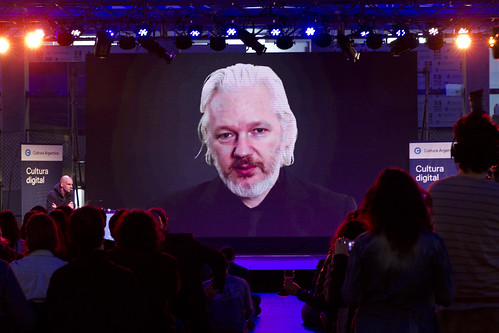 If recent press reports are to be believed, Wikileaks founder Julian Assange is the target of a secret grand jury investigation, either in the federal court of the District of Columbia or in the notorious Eastern District of Virginia, known colloquially as "the espionage court." Assange is currently holed up in the Ecuadorean Embassy in London, where he fled to avoid a British arrest warrant and probable extradition to Sweden on what supporters and many legal analysts called a flimsy sexual assault case.

The Swedish case was dropped last week, but Assange remains in the embassy. British authorities say that he still faces a misdemeanor UK charge of jumping bail (on the moot Swedish case), but the British disingenuously won't talk about the rumors of a US case and the possibility of extradition to the US.

For its part, the Justice Department isn't saying anything. Still, the Trump administration, like Obama's before it, has made it clear that it sees Assange as an arch-criminal, rather than a journalist. And CIA director Mike Pompeo went so far as to say that Wikileaks acts as a "hostile foreign intelligence service." Remember, Pompeo is the same guy who said that he'd like to see Ed Snowden "hang from a tree until he's dead."

I'm not an Assange fan personally. We have some friends and acquaintances in common, and they tell me that he is a misogynist. And we can't ignore the fact that Assange's single-minded obsession with ruining Hillary Clinton during the 2016 election and publishing the embarrassing "Podesta emails," very likely played a role in giving us Donald Trump.

Still, the Trump administration's position on Assange is to level serious charges and to speak bombastically. Neocon and neoliberal rhetoric aside, though, Wikileaks is a journalistic entity devoted to transparency and Julian Assange is a journalist, whether Washington muckety-mucks like his politics or not. A criminal case against him could put the CIA in a very difficult position because a trial would have to lead to invocation of the Classified Information Procedures Act (CIPA). It could also lead to a constitutional crisis over the first amendment's freedom of the press. If Wikileaks is devoted to transparency and exposing governmental waste, fraud, abuse, and illegality -- which it is -- well, that's the definition of journalism, isn't it? Even the most basic charges against Assange would merit appeals to the Circuit Court of Appeals and to the Supreme Court. Does the Justice Department want to risk overturning the Espionage Act? It would be a serious gamble.

CIPA, which was passed into law in 1980, allows the government to keep things secret in a national security trial that otherwise may have been made public. It reduces incidents of "graymail," where a defendant may insist on revealing classified information to defend himself. For example, if a defendant is charged with revealing that "Zorg" was a secret program that damaged Iranian widgets, and both "Zorg" and the widgets are classified, "Zorg" will be referred to in the trial as "carwash," or some such nonsense, and the widgets will be referred to as "cigars." The jury has no real idea what in the world was revealed in the first place. But, at least in the Eastern District of Virginia, they always vote "guilty" anyway.

At the District Court level, then, the only way for Assange to get a fair trial would be for the court to order the declassification of CIA and FBI documents necessary for his defense. Would the intelligence community want to risk even further exposure of classified information in a trial? They would have to if they intend to prosecute. Assange is entitled to this information as discovery. But does the government want to take the risk of Assange passing the discovery on to Wikileaks, again, in the interests of transparency, CIPA be damned? Furthermore, the CIA has never said one way or the other if the documents that Wikileaks has released as attributable to the CIA are actually original and true Agency documents. They would have to do so in a trial.

Policymakers at the Justice Department, the CIA, the FBI, and the White House clearly have not thought this through. It's one thing to criticize journalists who publish stories that contain "classified" information. It's an entirely different thing to try to punish those journalists under the Espionage Act. And it's unprecedented in American history. Cooler heads have to prevail in Washington. You don't have to like Julian Assange's politics to love constitutional freedoms. You don't have to like Julian Assange as a person to value what he and Wikileaks do to expose waste, fraud, abuse, and illegality (which, by the way, is the very definition of whistleblowing). Julian Assange could not get a fair trial in a federal court. He shouldn't have to have any trial in the first place.

Related Topic(s): Julian Assange, Add Tags
Add to My Group(s)
Go To Commenting
The views expressed herein are the sole responsibility of the author and do not necessarily reflect those of this website or its editors.