Not satisfied with the Republican Party, it seems the Christian Right is trying to infiltrate the enemy! 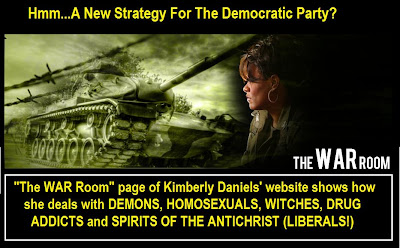 Kimberly Daniels, the "Ghost Behind Pat Robertson's Rant About Demonic Halloween Candy" (OpEdNews, Oct. 31, 2009) is running for Jacksonville, FL City Council - AS A DEMOCRAT! This was reported by Wayne Besen (Truth Wins Out):

For the unacquainted, Daniels is a former drug dealer, prostitute and military veteran turned preacher who is now running for Jacksonville City Council as a Democrat. (Yeah, that's not a typo -- she plays on the Donkey team).

For all intents and purposes, however, Daniels looks more like a far right Republican ala Michele Bachmann:

The people of Jacksonville need a fresh breath. They need to know who they are voting for. I am not going to play the political games of pretending to be someone or something else to get elected and then having to spend four years living a lie.

Very interesting, indeed. Yes, lying is a sin, but so is omission: the website fluffs over Daniels' "ministry" (for the record: she did not receive a "Doctor of Divinity, her "Doctorate" was in "Christian Counseling" from an as-yet-unknown school) and avoids her anti-Semitic statements ("You can talk about the Holocaust, but Jews own everything.") and her statements about liberals:

Just as antichrist spirits rule in their arenas with programs such as the View and CNN News, we will rule in the dominion Christ has called us to reign in.People calls these news liberal"we call them antichrist.

It might behoove the Democratic Party to look into this, unless they need the votes so badly that they are willing to run a "demon-buster" for the City Council. Then there was, of course, her famous statement about demonic Halloween candy which Pat Robertson so dutifully recounted on the 700 Club: "Most of the candy sold during this season has been dedicated and prayed over by witches."

The most frightening thing about Daniels, however, is her militaristic, promotional rhetoric which was even pointed at President Obama immediately after his occupation of the Oval Office. She chides him about his scriptural reference concerning homosexuality:

He claims to be a Christian, but in his book The Audacity of Hope he calls the first chapter of Romans an "obscure" passage of Scripture. God's admonition about the sin of homosexuality is hardly obscure. It is very clear!

So the question remains: how could someone like that run under the Democratic banner?

It's just possible that Democrats themselves don't know: go to Democratic candidate for Jacksonville Mayor Alvin Brown's campaign website. There is no mention of Kimberly Daniels. Then go to Duval County's Democratic website: same thing. Huh? Yet she has gone on record as a running Democratic candidate for Jacksonville City Council. A little digging in local print coverage of Daniels clearly points out her past and even some chicanery going on within her own "ministry.":

Daniels and her 400-member church are deeply intertwined, so much so that Spoken Word provides her with a 4,800-square-foot house where she lives free of property taxes. "We have a small church and most of my income goes to the church," she said.

Building up a public persona is a difficult thing to do: you have to make sure that ALL of your past statements must be clarified, and not swept under the rug. The video below, put together by Bruce Wilson for TWO, shows how Daniels is lionized by Rightwingers like Cindy Jacobs and "Bishop" Harry Jackson while at the same time, professes how she hates homosexuals, is thankful for slavery ("If it weren't for slavery, I'd be back in Africa somewhere worshippin' a tree!") and shows her anti-semitic bent (to an almost empty audience).

Rev. Dan Vojir is has been writing/blogging on religion and politics for the better part of ten years. A former radio talk show host (Strictly Books " Talk America Radio Network) and book publisher, Dan has connected with some of the most (more...)
Related Topic(s): Anti-semitic; Antichrist; Bishop Harry Jackson; Cindy Jacobs; Democratic; Democratic Party; Demonizer; Halloween; Holocaust; Homophobic; (more...) Homosexuality; Jacksonville; Slavery, Add Tags  (less...)
Add to My Group(s)
Go To Commenting
The views expressed herein are the sole responsibility of the author and do not necessarily reflect those of this website or its editors.