Trump's response to his loss in the 2020 election has been despicable and pathetic. It will lead to him being written into the history books as the biggest, worst loser in modern history. But that loss is just one of a plethora of others and, for once, trickle down theory actually works. 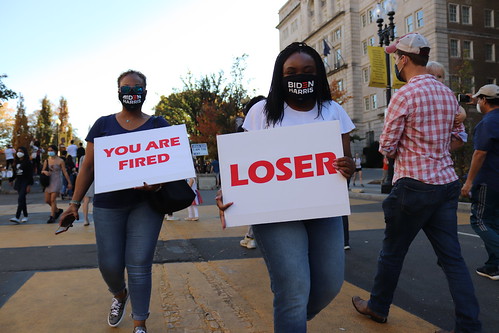 Trump has miserably failed to respond to the pandemic in a creative, intelligent way, even surrounded by his appointed advisors-- because the only people he would choose and who were willing to accept his appointments have been loser sycophants. Worse than losers, they have been toxic, even psychpathically destructive and malevolent-- Betsy DeVos, Mike Pompeo, the list is so long-- and most of them were such losers that they eventually were thrown under Trump's bus, as anyone not a fool knew would happen.

Trump promised to have 20 million vaccinated by the end of the year. It looks the actual number will be two million.

Trump said he was providing all the tests for Covid-19 needed. It never happened.

Then, supporting my theory that trickle-down theory actually worked with Trump there are Trump's enablers-- his republican sycophants in congress. Mitch McConnell, with his team of vile, hateful refusers blocking real help for the millions of people who have lost their jobs and who are threatened with eviction. Worse, they are using the desperate need for help to push through legislation that is anathema to most of the people in the US.

The reason Trump and the Republicans are doing/perpetrating these stupid, loser things is because they are supported by tens of millions of losers. People who have been bamboozled by Trump's lies and false promises, people who have been suckered into buying idiotic conspiracy theories, like QAnon or the idea that poor Donald would do good except for the evil socialist Democrats who have stymied him.

Trump has excreted over 20,000 lies, yet his supporters ignore them.

Further supporting the trickle-down effects of the Donald, Trump has an incredibly long history of immoral acts, yet his religious supporters ignore or make excuses for them. These religious supporters are small god Christians who Jesus would have thrown out of the Temple-- and might be better characterized as "The Devil's Christians." They're supporting an evil vile man. And many, if not most of them are also fascinated or even obsessed with the rapture, which involves the coming of the antichrist. They believe that with the coming of the antichrist, that Christ will return. But in that obsession, is the desire for the Antichrist to come, which is why evangelicals support Israel, since they believe that is where the antichrist will arrive.

And there are an estimated 70 million Evangelical Christians, 85% of them, "Devil's Christians," who support Trump. That would account for almost 80% of the people who voted for Trump.

I don't blame all people who voted for Trump. Some voted against Biden, not for Trump. Matter of fact getting people to vote AGAINST Democrats, rather than FOR Republicans is a major strategy Republicans use, certainly a major approach being used in the current Georgia run-off elections. Can you say Soros, Antifa and socialst/communist?

But it gets worse. If we're going to talk about losers, we really can't leave out Nancy Pelosi, Chuck Schumer and the DINO centrist DNC and most members of the congressional Democrats. They profoundly failed the American people in coming up with a pathetic $600 Covid-19 benefit. They failed the American people in being unable to stand up to grotesque monster Mitch McConnell. Where have all the other senate presidential candidates, besides Bernie Sanders, been? Why haven't they been speaking out? Kamala Harris, Elizabeth Warren, Amy Klobuchar, Michael Bennet, Cory Booker, Kirsten Gillibrand, have all been relatively silent. They should be holding up the Senate, stopping it from doing anything else, speaking out. Their failure to do so certainly make senate leader Chuck Schumer a loser and it makes them losers.

Joe Biden has spoken out for the $2000 Covid-19 relief benefit. Hopefully, he'll do what Donald Trump did, in August, and at least get out another $900 or $1200 in $300 distributions, beyond what the failed Pelosi Schumer legislation came up with.

Let's hope that the year 2021 offers us some actually functional people who are not such horrific losers. I have some hope that the "squad" which started with AOC, Tlaib, Presley and Omar, which has grown to include at least three more members, Jamaal Bowman,(D-N.Y.), Marie Newman, (D-Ill.). And Cori Bush, (D-Miss.)

Of course the way to deal with elected losers is to defeat them in election. I am no fan of Joe Biden and I expect I'll be fighting his centrist Neoliberal policies for the next for years. But he will be better than Trump in most ways (I do fear that he'll start wars and military conflicts.)

This isn't a very hopeful article. I write it at a time when the pandemic is hitting its worse moments-- because of loser decisions and loser leadership. Let's hope 2021 brings us better.

Related Topic(s): Evangelical; History; Losers; Trump; Zionists, Add Tags
Add to My Group(s)
Go To Commenting
The views expressed herein are the sole responsibility of the author and do not necessarily reflect those of this website or its editors.