"They're taking our houses"

- A Resident of Council District 12

In 2016, 71.15% of the voters in Los Angeles County voted to approve Measure M. This measure increased the sales tax by a half a cent in part to "expand rail/subway/bus systems". As described by Metro, the government agency that is responsible for managing the resulting projects, prior to the election this "would include new bus rapid transit (BRT) service from [the CSUN] campus to the proposed East Valley Transit Corridor rail system, via Nordhoff Street".

Ensuring that the north San Fernando Valley was included in the plans for Measure M was essential in order to fulfill the promise of a complete transit system for the county. There are currently no high-frequency East-West bus lines in the north San Fernando Valley, which severely limits the ability to funnel people into existing and planned transit infrastructure. As the largest trip generator in this part of the city, including direct access to Cal State University, Northridge (CSUN) is essential to ensure that any system implemented has the maximum possible ridership. To assure the voters of the North Valley that they would get a share of the funds provided by the new sales tax, the plan for a route that included Nordhoff Street as it passed in front of the CSUN campus was clearly spelled out for them in advance.

As the runoff election for Los Angeles City Council approaches, candidate John Lee is ignoring the wishes of a supermajority of the voters and proper oversight of sales tax funds by opposing the Nordhoff route for a BRT line. Even worse, he is doing so in a way that has distorted reality to generate fear in the community that borders on hysteria. The proposed mass-transit project will help reduce car trips in an area that is massively congested. Under Lee's leadership, those living along the proposed route have been convinced that it will destroy their way of life and lead to the forced confiscation of single-family houses.

"Developers want to grab our land."

- A resident of Council District 12

While the BRT line along Nordhoff Street will not gain formal approval until at least 2021, the project as currently envisioned will improve the current road infrastructure so that buses traveling in dedicated lanes will have traffic-signal priority. To further increase efficiency, dedicated stations will be outfitted with technology that allows passengers to pay before the bus arrives. In addition to CSUN, the system would connect the area with the popular Orange Line, the Northridge Mall, the proposed East Valley Transit Corridor light rail line and the Red Line station in North Hollywood.

Since the line will be constructed on an existing roadway, there will be no need for mass use of eminent domain. Still, Lee has convinced his supporters that they will somehow lose their houses if the project is approved. They are also holding the mutually exclusive fears that the new line will reduce their property values and make the area more attractive to developers. While the MTA has nothing to do with zoning, Lee has convinced them that because the line is being installed, single-family homes will be removed from the area to be replaced by apartment buildings.

"The Metro Line would increase homelessness"

- A resident of Council District 12

Unfortunately, there is an even darker undercurrent to some of the opposition. While Lee uses the flowery language of "preserving the character of the neighborhood," it is clear that what his followers hear, "keep out members of society that I find less desirable." Instead of viewing this new line as a way to connect them to the rest of the city, they fear it as a way that will bring outsiders to them.

John Lee represents a long line of establishment politicians from the North Valley who have embraced the art of NIMBYism. The latest example was provided by Lee's former boss, Mitch Englander, who ensured that Council District 12 was the only district in the city that has not built housing for the homeless under Measure HH. Our city deserves better. It is time to cast away fear-mongering for real leadership. Loraine Lundquist is a proven leader who stood up for the residents of Porter Ranch when politicians like Lee were still cowering from holding the gas company accountable. Lundquist actively works to solve the homeless problem instead of working to keep it hidden from view and she looks to address problems instead of feeding irrational fears. 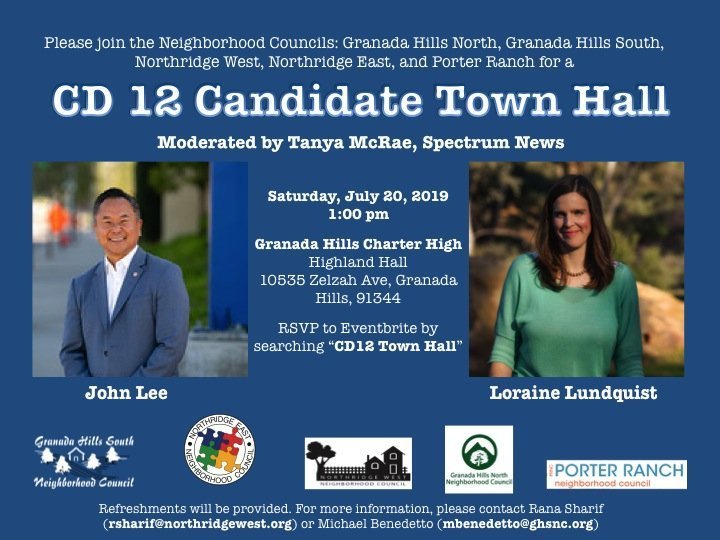 (Image by CD 12 Candidate Town Hall)   Details   DMCA
Carl Petersen is a parent and special education advocate, elected member of the Northridge East Neighborhood Council and was a Green Party candidate in LAUSD's District 2 School Board race. During the campaign, he was endorsed by Network for Public Education (NPE) Action and Dr. Diane Ravitch called him a "strong supporter of public schools." His past blogs can be found at www.ChangeTheLAUSD.com. Opinions are his own.