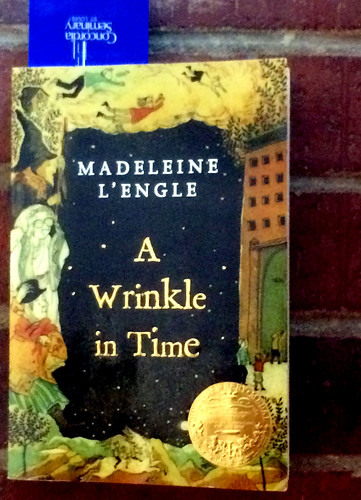 A Wrinkle in Time
(Image by byzantiumbooks)   Details   DMCA

"Man is tormented by no greater anxiety than to find someone quickly to whom he can hand over that great gift of freedom with which the ill-fated creature is born."

It is heartening to know that there are young children still reading books. While a growing majority of parents, who aren't, have been seduced into destroying their children's imaginations by placing them in front of screens, there are still holdouts who realize that if their children are ever to become free- thinking adults, they must grow up expanding their minds in the meditative space of beautiful literature on paper pages. Only there will they find the freedom to dream, to stop and close their eyes as they travel through unknown realms of wonder.

I know young children who are doing that; my grandchildren are. They are doing a most dangerous thing: they are thinking. They are purposely cut-off from the madding crowd that is lost in the disorienting madness of electronic cyberspace.

I have seen some children reading a book that has them thinking about the meaning of freedom, what it means to be an autonomous and courageous individual in a country in which brainwashing has been refined to a fine psychological art, and normality has been proffered as a great achievement by a corporate media serving as stenographers for the power elite. They are learning a profound lesson: that the crowd is untruth and that to be a person one must of necessity stand out.

No, they are not reading Kierkegaard, Orwell, or Dostoevsky. They are reading a writer who sounds the same themes but speaks the language of 9-12 year olds, a supremely intelligent writer of beautiful prose who never condescends to write down to them. They are reading Madeleine L'Engle's A Wrinkle in Time.

"You should read it, Papa," my daughter said to me decades ago when she had read it. "You would really like it."

Valuing her judgment and knowing she was asking me to share an experience she felt important to us both, I did just that. And I can gladly report that it is a book of profound importance, a beautiful and exciting "children's" book for children of all ages. I found in reading and rereading it that I better understood the pressures to conform, to give up the struggle for an essential self, that my twelve-year- old daughter and other young people were subjected to. Those pressures, aided and abetted by today's nefarious high-tech social media and their promoters, have increased a hundred-fold. It is supremely ironic that the pressures to conform that L'Engle wrote about in 1962, when the book was published, have become so much more intense because those who became adults in the following years became such conformists themselves by embracing all the high-tech gadgetry they have subsequently placed in their children's vulnerable hands. Books may help one become a Self, but freedom's just another word for most people of any era, who far prefer being part of the crowd and losing themselves in it.

From L'Engle's book I came to see anew the meaning of love and respect for people -- their sacred, inviolable dignity -- that means nothing to tyrants of all sorts who manipulate and abuse people to satisfy their machinations. Rather than just being obvious and crude, today these tyrants are part and parcel of a triumphant therapeutic, celebrity culture that advises: "Just relax and don't fight and it will be much easier for you. Don't stress." In other words, shrink to fit. But their guile and bad faith is so sophisticated that their conformism is advertised as freedom and self-affirmation. "Don't shrink to fit." "Be yourself." "Be Free." Every school child in the country is urged to become "a critical thinker," as they are molded to the rule of group think that dominates the nation's schools. When all have achieved the pedagogues' goal of "critical thinking," there will be no independent thinkers among them.

Since 1962, A Wrinkle in Time has sold over 14 million copies. In its essence it is the story of Meg Murry, a young teenager who feels dumb and ugly and very different from her schoolmates, and who, as fate decrees, must set out on a long journey in search of her true self. "I hate being an oddball," she says, "I try to pretend, but it isn't any help."

Her "problem" is that she is too straightforward and can't, unlike so many of those around her, pretend to be what she isn't, a phony actor. She values honesty over pretense, but finds this is not the way of the so-called normal world, where pretense and living lies prevail. Luckily for her, however, she has a highly precocious and independent five-year-old brother, Charles Wallace, who loves and understands her better than she does herself, and whose support is instrumental in her finally coming to accept and celebrate her own uniqueness and how it is tied to the search for truth in all things.

As the story begins, Meg is confused and hurt because someone or something has caused her father, to whom she is extremely close, to disappear. She misses and yearns for him, but no one, including her mother, can or will tell her anything about his mysterious disappearance. Authority figures, such as the school principal, urge her to give him up for dead, something she adamantly refuses to do.

So with the help of Charles Wallace with his uncanny powers, they meet three wonderful and mysterious figures -- Mrs. Whatsit, Mrs. Who, and Mrs. Which. This trinity helps them travel through space and time to the planet Camazotz where their father, a scientist, is held captive by the malign force IT, a pulsing brain that has brainwashed all the inhabitants into being identical automatons with no wills of their own. On Camazotz everyone is comatose; it is a place where everyone has given in, where everyone is alike and no differences are allowed. The brainwasher, IT, the ultimate tyrant, has convinced people to hand over their freedom and wills for a painless existence. It tells the children:

Related Topic(s): Children; Courage; Freedom; Future; Lies; Lies Media; Love; Propaganda; Thinking; Truth; (more...) Truth Teller, Add Tags  (less...)
Add to My Group(s)
Go To Commenting
The views expressed herein are the sole responsibility of the author and do not necessarily reflect those of this website or its editors.