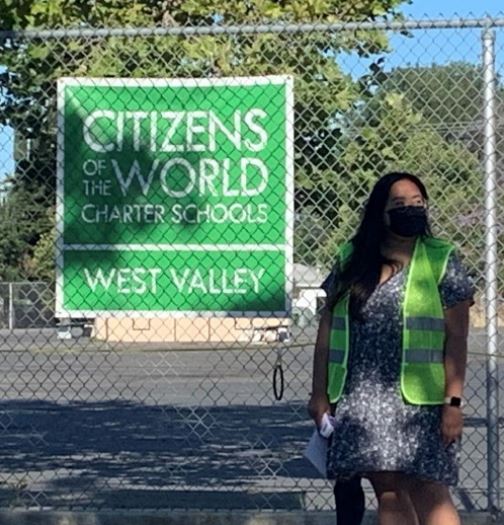 The Citizens of the World chain of charter schools describes itself as being committed to "socio-economic, cultural and racial diversity." They claim to be "the first national school network with a commitment to economic and racial diversity". But just how well does this school live up to these lofty goals?

According to the California Department of Education (CDE), 43% of students attending Citizens of the World Charter School 5, which is located in Reseda, are white. Hispanic or Latino students make up the next largest racial group comprising 23.7% of the student body. This is about a third of the percentage of Hispanic students in the Los Angeles Unified School District (LAUSD).

To experience the promised diversity, the students at Citizens of the World only have to look across the schoolyard. To open this latest iteration of the Citizens of the World franchise, space had to be given up by Shirley Avenue Elementary School. The CDE database shows that only 5.5% of the students at this public school are white. Like much of the LAUSD, about three-quarters are Hispanic or Latino.

Not only does the student body of Citizens of the World West Valley not reflect the neighborhood where it is located, but the charter school is also harming the students whose parents have chosen to send them to their neighborhood public school. Contrary to the publicly funded private school's claims, the rooms that it occupies were not empty but used to provide vital services for students with special-education needs, academic enrichment, and community support. COTW has told its parents that they "saved" Shirley by moving onto the campus, but they actually diminished the delivery of vital services that were valued by the community.

(Image by Carl J. Petersen)   Details   DMCA
While making it more difficult for Shirley to provide meaningful services to children with special-education needs, Citizens of the World follows the trend of charter schools not serving these students at the same rate as public schools. While 17% of Shirley's students have disabilities, only 9% of COTW's students have this classification.

The disparity is even worse for English Learners with only 3% of the charter-school students falling into this category. On the Shirley side of the campus, 23% of the students are receiving extra services as English Learners.

COTW has also not achieved the economic diversity that it promised. While 85% of Shirley's students are considered to be Socioeconomically Disadvantaged, only 21% of the charter-school students receive this classification. This seems to confirm the NAACP's claim that charter schools are resegregating our children.

It is also clear that the administration at COTW was not honest about the amount of space they needed. While the charter-school chain claims that it has "seven times more interest than space", this has not been the result at the West Valley campus. While the projected enrollment on the Shirley campus was supposed to be 234 students, only 135 are actually attending the school. This is on par with the entire chain's actual performance, which has racked up about $1 million in over-allocation penalties over the years for requesting more space than they needed. Approximately 90% of these funds would be distributed to the schools affected by COTW empty classrooms, but the charter chain refuses to pay the past-due amount and the LAUSD has failed to make them comply.

The chain's website is also less than honest about its record of expanding to other states. While it truthfully points out that the chain expanded "to Brooklyn, where two schools (Crown Heights and Williamsburg) opened in 2013", it leaves out the part where it was also forced to close these two franchises. This was due to low enrollment, a rocky relationship with the school where it was co-located, and the fact that they were "some of the lowest-performing schools authorized by SUNY" (State University of New York).

(Image by Carl J. Petersen)   Details   DMCA
Citizens of the World has clearly failed in its mission to improve the delivery of education in neighborhoods where it is located. This should not be surprising given that its founders had no realization that their privileged experience could not be transferred to communities that lacked that privilege. Schools like Shirley need to receive support, not competition. Most importantly, it does not take a charter school to provide a place where white students can experience diversity. This diversity already exists in our public schools.