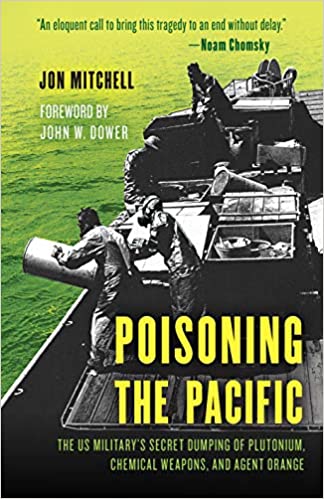 Poisoning the Pacific: The US Military's Secret Dumping of Plutonium, Chemical Weapons, and Agent Orange
(Image by Amazon.)   Details   DMCA

Poisoning the Pacific: The US Military's Secret Dumping of Plutonium, Chemical Weapons, and Agent Orange, a new book by Japan-based journalist Jon Mitchell, is a detailed investigation and documentation of U.S. and Japanese military chemical and biological poisoning and pollution across the Pacific, Asia and South East Asia. Mitchell's work doesn't cover the U.S. military poisoning of Hawaii as that would require a separate volume due to the concentration of the U.S. military bases and their pollution in the state. But, his book of military poisons found in the rest of the Pacific is an excellent guide for an investigation into the pollution and contamination in and around the military bases in Hawaii. This article is a start in that direction.

U.S. military contamination in Hawaii comes from the many major military bases on four of the islands of Hawai'i. On Oahu the U.S. military bases include Pearl Harbor Naval Base, Hickam Air Force Base, Schofield Barracks Army Base, U.S. Army's Fort Shafter, Tripler Army Hospital and Kaneohe Marine Base. The island of Kauai has the large Pacific Missile Test Facility. The Big Island of Hawai'i has the massive 130,000 acre firing range at Pohakuloa Training Area. The island of Kahoʻolawe is still contaminated from being bombed for decades. About 43,000 active duty members, 9,600 Guard and Reserve, 60,000 dependents and 20,000 military employees live in Hawaii, mostly on Oahu. The military complex population of 132,600 comprises 10% of the 1.4 million population of the state.

Mitchell's book begins with the World War II story of Japanese Unit 713 -- that developed chemical weapons on the Okinawan island of Okunashima and supervised their brutal, inhumane use in China during World War II. After the war ended, the U.S. gave immunity to the Japanese scientists and military medical officers responsible for the anthrax, botulism and supervised freezing to death of prisoners and allowed Japanese officials to go on to positions in prestigious medical and academic positions in Japan rather facing than prosecution as war criminals (as was done in Germany) in exchange for the data of the biological and chemical "experiments" done on tens of thousands of Chinese.

While there were no experiments with anthrax in Hawaii that we know of, there were other chemical and biological experiments with potentially lethal consequences conducted in the islands. On the Big Island of Hawai'i in the watershed of Hilo, the island's largest town, in April and May 1967, in an experiment named "Red Oak Phase 1," the U.S. Army detonated 155-mm artillery shells and 115-mm rocket warheads filled with deadly sarin gas in the dense rain forest of the Upper Waiakea Forest Reserve. Sarin, a highly toxic nerve agent is absorbed through the nose, mouth, eyes and, to a lesser extent, the skin, and can block breathing, dim vision and, in sufficient doses, bring on coma and death. While the U.S. military claims that the sarin gas was away from populated areas and would not be a danger to people, 53 years later, hunters are hesitant to go into that part of the forest reserve as nothing grows there according to long time Big Island resident Jim Albertini. A wide range of chemical and biological weapons were tested in the Waiakea forest.

In the 1960s, in a project called Shipboard Hazard and Defense or SHAD, the U.S. military conducted six tests in the Pacific using nerve or chemical agents that were sprayed on ships and their crews to determine how quickly the poisons could be detected and how rapidly they would disperse, as well as to test the effectiveness of protective gear and decontamination procedures in use at the time. Of the six tests, three used sarin, a nerve agent, or VX, a nerve gas; one used staphylococcal enterotoxin B, known as SEB, a biological toxin; one used a simulant believed to be harmless but subsequently found to be dangerous; and one used a nonpoisonous simulant.

The SHAD tests were a part of 134 biological and chemical warfare vulnerability tests from 1962 to 1973 planned by the Department of Defense's Deseret Test Center in Fort Douglas, Utah. The Project 112 and Project SHAD tests consisted of both land-based and sea-based tests at different locations, including at least six in Hawai'i.

One of these tests, a test named Flower Drum Phase I , was conducted in 1964 off the coast of Hawaii, which involved spraying sarin gas and a chemical simulant onto the George Eastman, a Navy cargo ship and into its ventilation system while the crew wore various levels of protective gear. In phase 2 of the test, VX gas was sprayed onto a barge to examine the ship's water wash-down system and other decontamination measures.

In August and September 1965, a test named ''Fearless Johnny" was carried out southwest of Honolulu in which the George Eastman and her crew were sprayed again, this time with VX nerve agent and a simulant to ''evaluate the magnitude of exterior and interior contamination levels'' and to study ''the shipboard wash-down system." VX gas, like all nerve agents, penetrates the skin or lungs to disrupt the body's nervous system and stop breathing. In small quantities, exposure causes death.

Additionally, in 1965, in an operation named "Big Tom," the U.S. military sprayed bacteria over Oahu to simulate a biological attack. The test used Bacillus globigii, a bacterium believed at the time to be harmless but researchers later discovered it was a relative of the bacterium that causes anthrax and could cause infections in people with weakened immune systems.

In April and May 1966, bacillus globigii was again used in Hawaii when it was exploded from bomblets. From April to June 1969, another experiment Deseret Test Center Test 69-32, was conducted southwest of Oahu, when a U.S. Air Force F-4 Phantom jet sprayed five Navy tugboats with Serratia marcescens and Escherichia coli, two germs that were thought to be harmless but Serratia marcescens in time turned out to be dangerous..

Ann Wright is a 29-year US Army/Army Reserves veteran, a retired United States Army colonel and retired U.S. State Department official, known for her outspoken opposition to the Iraq War. She received the State Department Award for Heroism in 1997, after helping to evacuate several thousand (more...)
Related Topic(s): Anthrax; Hawaiian; History; Military Active-Duty; Military Madness; Military Pollution; Poison; Pollution; Sarin, Add Tags
Add to My Group(s)
Go To Commenting
The views expressed herein are the sole responsibility of the author and do not necessarily reflect those of this website or its editors.