So Trump is at it again. His most recent racist trope is that Rep. Ilhan Omar (an elected-Representative, with a majority of the popular vote cast, who just happens to be, literally, an African-American) "hates America." This is the Trumpian version of the Leader Principle (otherwise know historically as the "Fuerher Princip "): "If you don't agree with me [on policy, e.g., national health insurance; practice, e.g., how to deal with asylum-seekers, or whatever] you are not a "true American" and "you hate your country." This is the latest in the Trumpian string of episodes racist /fascist rhetoric and practice that I wrote about last week(and actually began writing about, as noted in that column, back in 2011). Although there are a few Repubs. here and there who have taken exception at one level or another to what Trump has been laying out there in doses of increasing intensity, most are either staying silent, or supporting/excusing him, like the Dominionist, oh-so-principled, Mike Pence and Trump's Josef Goebbels imitator Stephen Miller did. 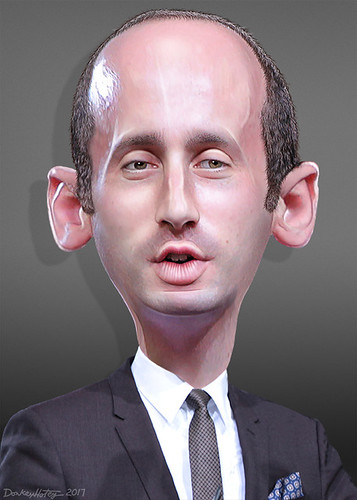 Stephen Miller: Gosh, and he looks so bland. Well, appearances can be deceiving after all.
(Image by DonkeyHotey)   Details   DMCA

Well, is what Trump is doing right now anything new? Is it a sudden violent departure from traditional Repub. policy? Well, no. In fact, the xenophobia part has been in the genes of the Republican Party since its beginnings. Millard Fillmore was the 13thPresident of the United Sates, and the last Whig to hold that office, succeeding to it upon the death of Zachary Taylor. Denied his party's Presidential nomination in 1851 he joined the American Party (otherwise known as the "Know-Nothings") and became their Presidential candidate that year. His party was known for its violent (sometime literally) antagonism towards the Irish (Catholic) immigrants who had been fleeing a very poor homeland since the 1830s, a flow that only increased with the Potato Famine in the mid-1840s. Fillmore became one of the founders of the Republican Party and brought his "know-nothingism" with him, where it festered over the years.

In 1875 the Republicans enacted the first specifically anti-immigrant law, the Page Act, which prevented the immigration of Chinese women (can't be birthing Chinese-ancestry people here, now can we --- sound familiar?) and then in 1882 they enacted the Chinese Exclusion Act. Then came the infamous, Republican, Immigration Act of 1924. It banned all immigration from all of Asia and set severe quotas for immigration from Eastern and Southern Europe, among other restrictions. This led to, among other things, the virtual impossibility for Jewish refugees from the Nazis getting into this country during the 1930s and early 40s, until the Second World War cut off Europe completely. In the mid-60s, what is now looked back upon as a remarkably liberal Republican Party agreed to the passage of the Immigration and Nationality Act of 1965, which liberalized matters very significantly. But with xenophobia gradually rearing its ugly head in portions of the Republican Party in this century (specifically among the members of misnamed "Freedom" Caucus, which should continue to be referred to by our side as the "Tea Party"), Trump has put it back to the head of the line of Republican policy. BUT, the point here is that this is nothing new for the Repubs. It just a resurgence of policy that has been in the blood (one might say) of the Party since its founding.

For most of its existence since the end of Reconstruction following the election of 1876, the Republican Party has been the party of reaction in the United States. In fact, the only reason that Rutherford B. Hayes, the GOP candidate in that disputed election, won, was that he agreed to end Reconstruction, essentially turning over the Southern states to the former slaveholders and the Ku Klux Klan. Very quickly, despite the best efforts of President Grant, 1869-1877, "The Party of Lincoln" (some Repubs. amazingly still use that term) became the Party of his predecessor, the racist, pro-slavery, Andrew Johnson (who most unfortunately Lincoln has chosen to "balance" his ticket in 1864). In practice, the party then very quickly turned a blind eye to the successor to slavery, Jim Crow. There were two bright exceptions to this rule (to a greater or lesser extent), Theodore Roosevelt and Dwight D. Eisenhower. But their influence did not last long. 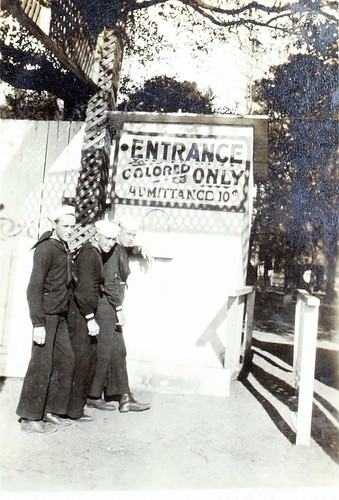 This is what it looked like folks. And those white boys are smiling.
(Image by San Diego Air & Space Museum Archives)   Details   DMCA

But then came Richard Nixon. In his early days he was an avatar of Joseph McCarthy (and his right-hand man, Roy Cohn, who would later become Trump's mentor), a violent political red-baiter, a virulent "anti-communist" abroad (who nevertheless later engaged in the first "de'tente" with the Soviet Union in the late 1950s and later than that opened the door to China) as well as an expander of the war on Viet Nam. But he wasn't known in his first 20 years in politics, particularly, as a racist. But then, in the late 1960s, he invented the Republican "Southern Strategy," openly moving into the Southern racist politics that the Democratic Party had left behind when it got solidly behind the Civil Rights Movement in the 1960s. The Southern Strategy has dominated Republican Party politics ever since. Even before that, they nominated Barry Goldwater for President in 1964 (Goldwater had famously voted against the Civil Rights Act of 1964) and then in the 1970's, after the Nixon resignation began the "clean-out" of the (relatively) liberal wing of their party, starting with the last major "big-government" voice in it, that of Nelson Rockefeller.

Although comprising an overall minority in the country, far right-wing voters are concentrated in the Republican Party. And they came to dominate the Republican primaries, meaning, of course, that Republican reactionaries always had a better chance of winning their party's nomination at any level than did liberal Republicans. And so, within the Republican Party the "Rightwing Imperative," that is to be able to win a Repub. nomination one had to move ever-further to the Right, was born. And so too, did the party eventually end up with the Louis Gohmerts, the Steve Kings, and the Jim Jordans of this world.

Ronald Reagan truly initiated the historical stream of GOP-led right-wing reaction that we now see in front of us, every day, for example on racism. The first campaign stop that Ronald Reagan made following his nomination for President by the Republican Party in 1980 was to the tiny hamlet of Philadelphia, MS. The village is significant historically only because it is the place that three northern civil rights workers were murdered by a white gang, including members of law enforcement, in the "Freedom Summer" of 1964. Nothing outright, but very symbolic to those Southerners who took note of such things. That was followed by his usage of racist terms, during his Presidency, like "welfare queen" and "young bucks." Such epithets and actions came to be known as "dog-whistles," because they were not openly racist. African-Americans, however, clearly knew where Reagan was coming from. Asked in an interview on NPR, a person with an African-American accent was asked if John Hinckley, Jr. (Reagan's attempted assassin) did anything wrong, she promptly replied "he missed."

And so, it came to Trump to take the hood off, politically, starting with his open and virulent sponsorship and use of the birtherism myth , beginning in 2011 (as dealt with frequently in this space), then continuing in the 2015-16 election campaign with birtherism still, and the anti-Mexican/anti-Muslim tropes. And the Trumpublicans (tm) are now stuck with it, and him, mainly because, whether they themselves are racist, they support his policies. But now they cannot separate themselves from his person, as embarrassing (the Repubs. don't seem to care much about this one) and possibly politically toxic (they do care about this one, although they may never be in a position to move on that concern) it may be. How the Democrats can and must combat this political racism generally and Trumpublican (tm) racism specifically, will be the subject of next week's column.

Steven Jonas, MD, MPH, MS is a Professor Emeritus of Preventive Medicine at StonyBrookMedicine (NY) and author/co-author/editor/co-editor of over 35 books. In addition to his position on OpEdNews as a "Trusted Author," he is a Senior Editor, (more...)
Related Topic(s): Birtherism; Goldwater; History; Immigrants; Irish; Racism; Republican Candidates; Republican Extremism; Republican Hate; Republican Pandering; (more...) Republican Racism; Trump; Xenophobia, Add Tags  (less...)
Add to My Group(s)
Go To Commenting
The views expressed herein are the sole responsibility of the author and do not necessarily reflect those of this website or its editors.