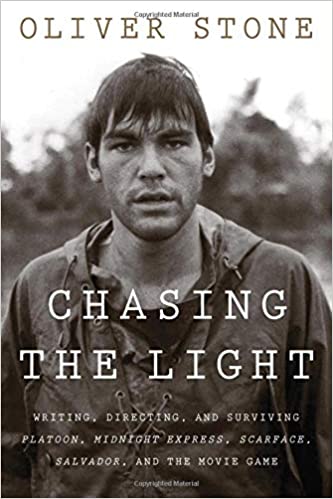 Like the wandering and rascally Odysseus upon whom he models his life, Oliver Stone is "double-minded" in the most profound and illuminating ways. The title of his fantastic new memoir is a case in point. "One of the first basic lessons in filming," he writes, "is chasing the light. Without it, you have nothing - no exposure that can be seen; even what you see with your naked eye needs to be shaped and enhanced by the light."

For as a true artist living out a marriage between his writing and his filmmaking, his father and his mother, the warrior and the peacemaker, the domesticated and wild man, he has chosen a title that has a double meaning that is subtly woven like a thread through this labyrinthine tale. It takes the reader from his childhood through his service in Vietnam and his struggles as a writer and filmmaker up to 1987 and his great success with his powerful autobiographical film, Platoon, for which he received Oscars for Best Film and Best Director, among others.

Driven by a youthful urge to escape his internal demons first brought on by his mismatched parents' divorce when he was fifteen, Stone dropped out of Yale, his father's alma mater, where he had enrolled to fulfill his stockbroker father's dream. He accepted an offer from a Catholic Church group to teach English-speaking high school students in Chalon, a suburb of Saigon, which he did for six months before traveling around southeast Asia. Back in Saigon, he joined the merchant marine and worked his way back to the states cleaning boilers, the lowest and dirtiest job on the ship. After a storm-tossed 37 days journey, he was cured of his desire to go to sea, a romantic fascination he had acquired from literature. The lesson: Books are not life, nor are movies - they are ways to shape and illuminate it.

Back in the states he threw himself into writing, his first love and the place where his "anxieties could be relieved" and where he felt he could confirm his independent existence separate from his parents. Through writing he could control his story. He wrote a novel called, "A Child's Night Dream."

He reentered Yale but only lasted a few months since his heart was not in the placid life of academia, having already had a taste of the wandering life. He then quit Yale for good, to his father's great disappointment. Lou Stone thought Oliver might turn into a "bum," a painful refrain in this memoir. This twisted parental inculcation of shame and fear cast a deep shadow on Oliver's soul and became one of the ghosts that he spent years trying to outrun by becoming a workaholic desperate for success. His novel was subsequently rejected and he fell into a deep depression and self-loathing.

Suicidal at nineteen, he volunteered to serve in the U.S. Army in Vietnam to expiate his guilt, shame, and self-loathing, thinking that perhaps God would take his life for him.

"Odysseus thought he would return home when he left Ithaca," he writes, "I wasn't sure of anything..."

It was in Vietnam on January 1-2, 1968, after a terrifying night battle along the Cambodia border where his unit was in a hot zone interdicting North Vietnamese Army troops coming through Laos and Cambodia toward Saigon, when he experienced a profound light experience very different from the type he would later chase while making films.

The battle raged throughout the dark jungle night where confusion and terror reigned. It was impossible to hear or see, and although 25 Americans and 400 North Vietnamese were killed, Stone "hadn't seen a single one of them [Vietnamese]," although he performed bravely. Here is his brilliantly disturbing and revealing description of what ensued.

Full daylight revealed charred bodies, dusty napalm, and gray trees. Men who died grimacing, in frozen positions, some of them still standing or kneeling in rigor mortis, white chemical death on their faces. Dead, so dead. Some covered with white ash, some burned black. Their expressions, if they could still be seen, were overtaken with anguish or horror. How do you die like this? Charging forward in a hailstorm of death into these bombs and artillery. Why? Were you terrified, or were you jacked out of your f*cking mind? What kind of death did you achieve? It was frightening to contemplate, and yet, I wasn't scared. It was exciting. It was as if I passed from this world and was somewhere where the light was being specially displayed to me in a preview of another life. Soldiers might say it was hell, but I saw it as divine; the closest man would ever come to the Holy Spirit was to witness and survive this great, destructive energy. [emphasis added by author]

So after fifty years in another life, the survivor remembers in that odd mixture that memory is, a shaping force that relies on the light of experience to enhance the existential marriage of hope lost and found, fact and fiction joined to find the truth of an epiphany. He continues:

No person should ever have to witness so much death. I really was too young to understand, and thus I erased much of it, remembering it in this strange way as a stunningly beautiful night full of fireworks, in which I hadn't seen a single enemy, been fired on, or fired at anyone. It'd been like a dream through which I 'd walked unharmed, grateful of course, but numb and puzzled by it all. It reminded me of passages in Homer of gods and goddesses coming down from Mount Olympus to the bloody battlefields at Troy to help their favorites, wrapping a mist or cloak around them and winging them to safety.

Related Topic(s): Book Reviews; Consciousness; Death; Family; Lies; Love; Reviews_ Books; Success; Time; Truth; (more...) Writing, Add Tags  (less...)
Add to My Group(s)
Go To Commenting
The views expressed herein are the sole responsibility of the author and do not necessarily reflect those of this website or its editors.