The average benefit this year is just over $17,600, certainly not enough to maintain a middle-class lifestyle. 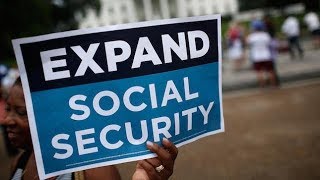 The Social Security 2100 Act proposed by Connecticut Representative John Larson is getting closer to being passed by the House of Representatives. It now has more than 200 co-sponsors. If it were to be approved and become law, it would both improve the program's benefit structure and its financial picture.

The biggest item on the benefit side is that it guarantees a benefit of at least 125 percent of the poverty level for anyone who has worked for at least 30 years. The logic here is straightforward; we should be able to ensure that anyone who has put in a full lifetime of work will not be in poverty in their retirement years.

The second big change on the benefit side is that it changes the cost-of-living formula for adjusting benefits by tying it to an index of consumption items purchased by the elderly rather than the overall Consumer Price Index. The inflation adjustment for Social Security benefits has long been a major issue, with many politicians wanting to change the formula to reduce benefits.

Updating the cost-of-living formula does not necessarily raise or lower benefits. It is simply an effort to make the indexation reflect the changes in the actual cost of living seen by the elderly. We know consumption patterns of senior citizens differ substantially from the population as a whole.

For example, they consume more health care and fewer new cars. This difference in consumption patterns could mean that their cost of living increases more or less than the rest of the population, but if we had an index geared to the consumption patterns of the elderly, at least we know it would be accurate.

The third feature on benefits is a change in the formula that will increase average benefits for a bit less than $400 a year. This has provoked some opposition since this increase will go to not just lower-income seniors, but also middle-class and relatively affluent seniors.

Opponents of hiking benefits argue that typical seniors are actually doing quite well. New research from the Census Bureau, based on tax filings, found that seniors were actually doing somewhat better than data from surveys indicated.

While this was good news, there is an important qualification to this finding. By far the main reason that income for seniors was higher than previously reported is that the survey data missed a lot of income from traditional defined benefit pensions. In other words, the Census study didn't find seniors had hundreds of thousands in savings that were not being picked up in the surveys; the story was defined benefit pensions.

This matters because we know that traditional defined benefit pensions are rapidly disappearing. This means that the picture of middle-class seniors retiring with little other than their Social Security to support them still looks right. The average benefit this year is just over $17,600, certainly not enough to maintain a middle-class lifestyle. For this reason, the modest benefit increase proposed by Larson is very reasonable.

Larson proposes to cover this increase, as well as the projected Social Security shortfall, by having a gradual increase in the payroll tax and applying the tax to very high-income workers. On the latter point, the income subject to the payroll tax is currently capped at just under $133,000. This means that someone earning millions of dollars each year would pay no more in Social Security taxes than someone earning $132,900. Larson's bill would make wages over $400,000 subject to the tax.

His other change is an increase in the payroll tax of 0.1 percentage point annually, split between workers and employers. This increase would continue for 24 years, for a total increase of 1.2 percentage points on both the worker and the employer.

While this is a middle tax increase, it is much smaller than increases we saw in the decades of the 1950s, 1960s, 1970s, and 1980s. More importantly, if we can sustain decent wage growth, it is a tax that should be easy to bear.

Dr. Dean Baker is a macroeconomist and Co-Director of the Center for Economic and Policy Research in Washington, D.C. He previously worked as a senior economist at the Economic Policy Institute and an assistant professor at Bucknell University. (more...)
Related Topic(s): Poverty; Retiring; Seniors; Social Security; Social Security Funded, Add Tags
Add to My Group(s)
Go To Commenting
The views expressed herein are the sole responsibility of the author and do not necessarily reflect those of this website or its editors.