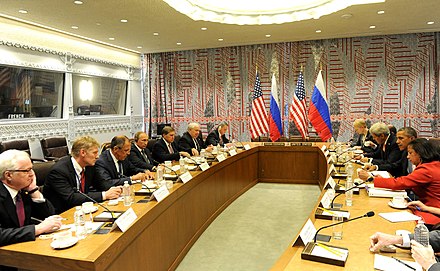 On April 13, US president Joe Biden spoke by phone with Russian president Vladimir Putin, whom he has previously referred to, in pot/kettle fashion, as a "killer." During the call, Biden proposed a summit between the two in the near future.

Writing in the Wall Street Journal, Russian chess legend and political exile Garry Kasparov denounces the idea: "A summit? With a killer? In one stroke, Mr. Biden gave Mr. Putin exactly what he craves, equal status with the president of the United States."

Kasparov is mistaken. Putin already enjoys that equal status. He rules a country spanning two continents, with a population of 150 million. He commands a nuclear arsenal rivaling that of the US, and armed forces of similar size but with a seemingly much better 21st century record of accomplishing their objectives instead of getting bogged down in decades-long "counter-insurgency" and "nation-building" quagmires ending in embarrassing defeats.

Even if we accept as undiluted truth every bad thing Kasparov tells us about Putin -- that he's a dictator kept in power by oligarchs, that he ruthlessly suppresses domestic political opposition, that his regime meddles in US elections and hacks US computer systems, and that his support for independent republics which seceded from Ukraine after the US-backed coup there in 2014 is a de facto invasion and occupation of Ukraine itself -- those things establish, rather than contradict, the fact that Putin is a key actor on the world political stage.

Nor, no matter what we think of Putin, can we deny that the Russian Federation would have real and vexing grievances with the US whether he was running things or not.

In 1990, as eastern Europe's communist regimes began to disintegrate, western diplomats assured their Russian counterparts that peaceful dissolution of the Warsaw Pact would not result in NATO's expansion eastward. They broke their word. NATO has since gobbled up much of the territory in question, impinging Russia's sphere of influence and massing militarily on its borders. From the Russian perspective, the pro-NATO coup in Ukraine was apparently the last straw.

At the moment, the Russia-Ukraine conflict is more or less "frozen." But if it thaws toward war pitting US and NATO troops against Russian forces there likely won't be any winners.

In 1958, British prime minister Harold Mcmillan, paraphrasing predecessor Winston Churchill, held that "jaw-jaw is better than war-war." He was right. Joe Biden and Vladimir Putin need to have a long, serious talk.

Related Topic(s): Joe Biden; NATO; Russia; Ukraine; Vladimir Putin, Add Tags
Add to My Group(s)
Go To Commenting
The views expressed herein are the sole responsibility of the author and do not necessarily reflect those of this website or its editors.