Michael Moore came out with this video on Monday, in which he is forthright about Biden's dementia. He goes on to talk about unnamed Democratic insiders who will take a call from Michael Moore (but not you and me) and they acknowledge Biden's cognitive problem, and then say, "Don't worry--Biden will have a very smart, very young VP"

Then on Wednesday, Tulsi drops out of the Democratic primary (which we might understand) and throws her support to Biden ???

So, is there a secret pact between them?

And what would be the consequences of a Biden-Gabbard team? Many times we've had incompetent Presidents that let their teams run the show. Bush Jr was alcoholic. RR had dementia his second term. Even Harry Truman was pushed into office woefully unprepared, and in the beginning he was probably in the hands of James F. Byrnes.

Dare we hope that it will be like Cheney and The Shrub? No, it seems to me that the Deep State has controlled every president we've had the last 30 years. I can't imagine Tulsi in the position as VEEP putting an end to that. And if I'm given the choice of voting for Biden-Gabbard or a Green Party ticket, I don't know what I'll do. 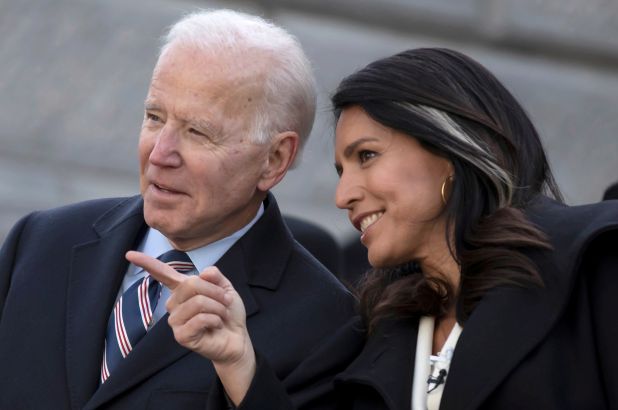 Related Topic(s): Gabbard-Tulsi; Joe Biden; Tulsi Gabbard; Tulsi Gabbard, Add Tags
Add to My Group(s)
Go To Commenting
The views expressed herein are the sole responsibility of the author and do not necessarily reflect those of this website or its editors.