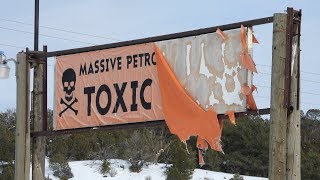 The climate crisis has put at least 945 designated toxic waste sites at severe risk of disaster from escalating wildfires, floods, rising seas and other climate-related disasters, according to a new study from the non-partisan Government Accountability Office (GAO), as the AP reported.

The country's most contaminated spots that pose an imminent threat to human health or the environment are designated Superfund sites. That means cleaning them up is a national priority. The EPA has identified more than 500 contaminants at Superfund sites, including arsenic, lead and mercury.

60% of Superfund sites are at risk from climate change, the GAO says, but the EPA refuses to increase protections." o/upbWaDy5tc Alec Luhn (@ASLuhn) 1574183033.0

However, the GAO found that efforts to secure the toxic waste have weakened as the Trump administration plays down their threat, according to the AP.

Senate Democrats responded to the report in a letter to the EPA Administrator Andrew Wheeler demanding an explanation for agency leaders' "failure to embrace addressing climate change as a strategic objective," according to the Washington Post.

"We believe that EPA's refusal to implement GAO's recommendations could result in real harm to human health and the environment as the effects of climate change become more frequent and intense," the lawmakers wrote to Wheeler, as the Washington Post reported.

The GAO report looked at 1,571 Superfund sites and found that six out of 10 are vulnerable to extreme weather caused by the climate crisis. The GAO produced an interactive map that shows each of the 945 vulnerable sites. It is color-coded to show if the site is threatened by wildfires, hurricanes, storm surge, sea-level rise, or coastal and river flooding, as the Verge reported.

The study recommended that the EPA start incorporating the climate crisis into its decision making for toxic waste sites and its risk assessments for the Superfund sites.

The EPA however has continued to deny the climate crisis as a threat to the Superfund sites, according to the GAO report. The EPA does not include the climate crisis in its agency-wide policies, which stops the EPA from tackling the risks at contaminated sites as the planet heats up and extreme weather events increase in frequency, duration and intensity, as Inside Climate News reported.

The EPA issued a statement that was largely dismissive of the report. The statement also managed to avoid mentioning climate change.

"The EPA strongly believes the Superfund program's existing processes and resources adequately ensure that risks and any effects of severe weather events, that may increase in intensity, duration, or frequency, are woven into risk response decisions at non-federal [National Priorities List] sites," EPA Assistant Administrator Peter Wright said in a statement Monday, as the AP reported.

The GAO decided to look into the safety of Superfund sites after Hurricane Harvey in 2017 brought record rains to Houston and caused one toxic site to spring a leak, as BuzzFeed News reported. Floodwaters there eroded an "armored cap" that sealed off dioxins and other toxins linked to cancer and nerve damage. In the wake of the storm, officials tested that water sediment. They found that dioxin levels in the sediment were 2,000 times above what the EPA allows, according to the Houston Chronicle.

Related Topic(s): Climate Crisis; Disasters; EPA Failure; Toxic Waste; Toxins, Add Tags
Add to My Group(s)
Go To Commenting
The views expressed herein are the sole responsibility of the author and do not necessarily reflect those of this website or its editors.