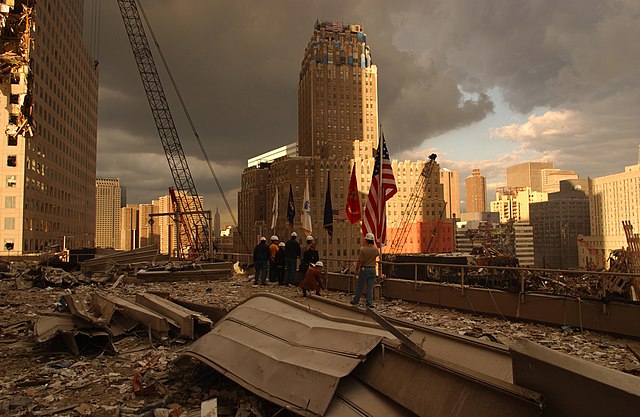 "The narcissist," someone once wrote on an Internet discussion forum devoted to the topic, "learns nothing, forgets nothing, and forgives nothing."

In conscious appeal to this tendency, the American political class flocks to shrines in New York, DC and Pennsylvania each year to once again cynically wring as much narcissistic flag-waving hoopla as possible from the anniversary of the 9/11 attacks.

I generally avoid watching these observances. This year my sole exposure to them was video of Democratic presidential nominee Hillary Clinton collapsing as she left the New York event during a medical emergency.

9/11 will remain American political propaganda's killer app (pun intended) for many years, I'm sure, but I consider 9/12 and the following few days far more important in the scheme of things. Call ME a national narcissist, but I find the response more compelling than the initiating event.

Fifteen years on, it is clear that America's political class still relies on Americans having learned nothing, forgotten nothing, and forgiven nothing. That reliance seems justified.

"Our politicians have acted for years with impunity, citing only our 'national interest,' as if any legitimate interest could be served by the intentional killing of civilians simply because those civilians have been designated 'the enemy'.

"We watched as those politicians were hustled away to 'safe houses,' the better to immunize themselves from the consequences of their own actions of years and decades past.

"Now, they emerge from their hiding places, and they wail and gnash their teeth, vowing revenge and demanding that we surrender even more of our freedoms in order to avoid more of what they themselves brought upon us in the first place. They regard the blood of September 11 not as a horrible payment for their past errors, but as ink with which to write new checks to the order of their power and drawn on the account of our lives and freedoms."

Has anything changed since I wrote that column? Not that I can tell.

After 15 years of unremitting exploitation of 9/11 to justify war on our civil liberties at home, and war abroad of the very type that culminated in 9/11, American politicians still believe that all they need to gull the populace into supporting more of the same is, as Joe Biden put it of Rudy Giuliani, "a noun, a verb, and 9/11."

They're right. And until that changes, nothing else will.

Related Topic(s): 911, Add Tags
Add to My Group(s)
Go To Commenting
The views expressed herein are the sole responsibility of the author and do not necessarily reflect those of this website or its editors.