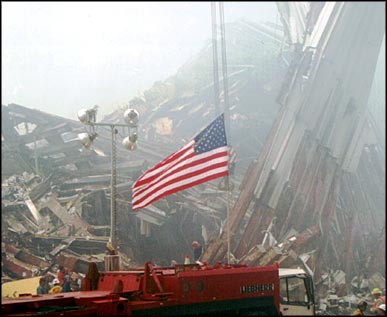 The events on September 11, 2001, changed the world. It was the excuse for the US government to launch military attacks on seven Middle Eastern countries, causing civilian casualties in the millions and sending waves of Muslim refugees into the Western world. The US government wasted trillions of dollars destroying countries and murdering women and children, while public infrastructure in the US deteriorated, Americans' homes were foreclosed, and American health needs went unattended. 9/11 was also the excuse for the destruction of the protection that the US Constitution provided to ensure the liberty of the American citizen. Today no American has the protection of the civil liberty that the Constitution guarantees.

On September 11, 2001, when a neighbor called and told me to turn on the TV, I stopped what I was doing and turned on the TV. What I saw was the two World Center Towers blowing up. I had often enjoyed lunch in the rooftop resturant in one of the towers across the street from my Wall Street Journal office.

A miniscule by comparison frail aluminum airliner hit one massive steel tower and then another aluminum airliner hit the other. There were some plumes of orange outside the buildings. Then approximately after one hour, less in one case, more in the other, the two towers exploded floor by floor as they fell into their own footprint.

Later that day Larry Silverstein, who owned, or rather, held the lease on the World Trade Center, explained on TV that the free fall collapse in the late afternoon of the third WTC skyscraper, Building 7, into its own footprint was a conscious decision to "pull" the building. Pull is the term used by controlled demolition to describe a building wired with explosives to be destroyed. Building 7 had not been hit by an airliner, and suffered only minor and very limited office fires. Silverstein's statement was afterwards corrected by authorities to mean that the firemen were pulled from the building. However, many videos show the firemen already out of the building with the fireman stating that the building was going to be brought down.

As there is no doubt whatsoever that Building 7 was wired for demolition, the question is why?

Because Americans are an insouciant and trusting people and confident of the inherent goodness of their country, years passed before even experts noticed that the official story stood in total contraction to known laws of physics, was in total contraction to how buildings collapse from asymmetrical damage, and could not have collapsed due to being hit by airliners as the buildings met all code requirements for withstanding airliner collusions. Many did not even know that the third skyscraper, Building 7, had collapsed.

Professor Steven E. Jones, a professor of physics at BYU, was among the first to see that the official story was pure fantasy. His reward for speaking out was to have his tenure contract bought out by BYU, many believe under orders from the federal government backed up with the threat that all federal support of science at BYU would be terminated unless Stephen Jones was.

Cynthia McKinney, a black woman who represented a Georgia congressional district in the US House of Representatives was either much brighter or much braver than her white colleagues. She raised obvious questions about 9/11, questions begging to be asked, and lost her seat.

Approximately five years after 9/11, San Francisco architect Richard Gage noticed that the three WTC buildings did not fall down in any way consistent with the official explanation. He formed Architects & Engineers for 9/11 Truth, currently about 3,000 members. This group includes high rise architects and structural engineers who actually are experienced in the construction of skyscrapers. In other words, they are people who know what they are talking about.

These 3,000 experts have said that the official explanation of the collapse of three skyscrapers stands in contradiction to known laws of physics, architecture, and structural engineering

In other words, the official explanation is totally impossible. Only an uneducated and ignorant public can believe the official 9/11 story. The US population fits this description.

A&E for 9/11 Truth is gradually gaining assent from architects and engineers. It is very difficult for an architect or engineer to support the truth, because the American population, which includes patriotic construction companies, whose employees fly American flags on their trucks, don't want to hire architects and engineers who are "enemies of America aligned with Arab terrorists." In America, if you tell the truth, you are in great danger of losing your customers and even your life.

Think now about physicists. How many physics faculties do you know that are not dependent on federal grants, usually for military-related work? The same for chemistry. Any physics professor who challenged the official story of 9/11 with the obvious fact that the story contravenes known laws of physics would endanger not only his own career but the careers of his entire department.

Truth in America is extremely costly to express. It comes at a high cost that hardly any can afford.

Related Topic(s): 9-11; 9-11 Controversy, Add Tags
Add to My Group(s)
Go To Commenting
The views expressed herein are the sole responsibility of the author and do not necessarily reflect those of this website or its editors.