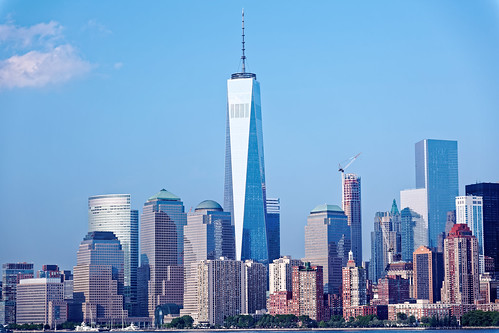 A view of the .Freedom Tower,. the replacement for the Twin Towers, from New York Harbor.
(Image by Michael Vadon)   Details   DMCA

Introduction: This is the third part of what I had originally planned as a three-part retrospective series of selections from the set of articles that I have published over the years on this topic. On the three days leading up to the 20th anniversary of those awful events, Sept. 8, 9, and 10, 2021, I am republishing those selections.

My original plan for this Part III of the series was to revisit what was called "The 28 Pages Controversy," re-publishing a column that I wrote on it, published on The Greanville Post in April of 2016. With the intention of the Biden Administration to release over time certain FBI documents pertinent to the events of 9/11 and the subsequent investigation, the matter of "The 28 Pages" may become moot, or not. And so, what I am doing in this third column in this series is, first, revisiting an article on the Controversy that appeared in The New Yorker at that time, and then presenting a broad series of questions about the events and the investigations into them that have still not been answered, at least answered fully, as the 20th anniversary of the awful events comes up tomorrow.

First, the excerpt from The New Yorker article:

"On the bottom floor of the United States Capitol's new underground visitors' center, there is a secure room where the House Intelligence Committee maintains highly classified files. One of those files is titled 'Finding, Discussion and Narrative Regarding Certain Sensitive National Security Matters.' It is twenty-eight pages long. In 2002, the Administration of George W. Bush excised those pages from the report of the Joint Congressional Inquiry into the 9/11 attacks. President Bush said then that publication of that section of the report would damage American intelligence operations, revealing 'sources and methods that would make it harder for us to win the war on terror.'

" 'There's nothing in it about national security,' Walter Jones, a Republican congressman from North Carolina who has read the missing pages, contends. 'It's about the Bush Administration and its relationship with the Saudis.' Stephen Lynch, a Massachusetts Democrat, told me that the document is 'stunning in its clarity,' and that it offers direct evidence of complicity on the part of certain Saudi individuals and entities in Al Qaeda's attack on America. 'Those twenty-eight pages tell a story that has been completely removed from the 9/11 Report,' Lynch maintains. Another congressman who has read the document said that the evidence of Saudi government support for the 9/11 hijacking is 'very disturbing,' and that 'the real question is whether it was sanctioned at the royal-family level or beneath that, and whether these leads were followed through.' Now, in a rare example of bipartisanship, Jones and Lynch have co-sponsored a resolution requesting that the Obama Administration declassify the pages." [It was eventually declassified on July 15, 2016.]

Then my 20 Questions (like the old radio/TV quiz show with which I grew up the 1940s and 50s). They are not presented in any presumed order of importance.

1. What has happened, if anything, with the information contained in "The 28 Pages?"

2. What was Pres. Bush thinking in "The 7 Minutes" between the time Andy Card, his Chief of Staff, whispered in his ear that the major attack had occurred and he (Bush) finally got up from his chair and slowly walked out of the 2nd grade classroom in which he had been sitting, reading a children's story with the pupils in that classroom? Again, what was the man thinking? Supposing the news he received had been something like, "Mr. President, the Japanese have just bombed Pearl Harbor?"

3. Why did he not immediately take full command of the Federal government's response, instead leaving that to V-P Dick Cheney (if that is indeed what happened)?

4. Why did Pres. Bush resist the formation of the "9-11 Commission" for so long?

5. Why did he then take so long to agree to testify to the Commission, but then only not under oath?

6. Why did he testify to the Commission only in the company of V-P Dick Cheney, not on his own?

7. Why has there never been an investigation of the "Pentagon bombing" comparable to that of the bombing of the Twin Towers?

8. Why did Pres. Bush not authorize the capture of Osama bin Laden in "Tora Bora" in the fall of 2002, when he had the chance to do so?

9. Why did Pres. Obama not make sure that once captured, Osama bin Laden would be brought back to the U.S. to stand trial, instead of apparently having him killed, or letting him die on his own, under possibly dubious circumstances?

10. Why were the 18 bin Laden family members flown out of the United States during the 3-day "no-fly" period after the attack, without the FBI being given a chance to interview them?

11. Why did Pres. Bush insist on having a former staff person of his, Philip Zelikow, head the 9-11 Commission?

12. Why is there such a long list of former officials who have/had questions about the Final Report and why have they never been interviewed/required-to-testify on them?

13. Did V-P Cheney actually order that the legally-provided-for shoot-down of the known-to-have-been-hijacked flight from Boston to New York be aborted, and if so, why? Or is that story apocryphal?

14. Why has "Guantanamo" been allowed to fester all of these years?

15. What were the "intelligence" results of the "Bush Torture Program" created secondary to "9/11"?

16. How come the lengthy, detailed, closely worded draft of "The Patriot Act" was ready for Congressional submission about two weeks following "9-11"?

17. Why did Pres. Bush not respond to the Clinton national security advisor Richard Clark on the matter of "Osama bin Laden" that Clark repeatedly raised during Transition sessions on national security, instead of talking constantly about "Iraq?"

19. Why did Attorney General John Ashcroft stop flying commercial at the beginning of the summer of 2007?

20. Why have the "Building 7 Questions" raised by Architects and Engineers for 9/11 Truth (see just below) never been subject to a formal/legal inquiry of any kind?

Postscript (that is, Question 21):

A national organization called "Architects and Engineers for 9/11 Truth" a) has over 2000 professionally reputable members (.facebook.com/ae911truth), and b) has raised many questions which, on their surface, would appear to be legitimate ones. The positions they take are controversial to be sure, but should there not be some kind of formal investigation of the concerns they have raised?

Postscript II: Here is the biggest lesson those of us who believe in Constitutional Democracy need to learn from the 20 Years since "9/11."

As put so well by Paul Krugman, "Foreign Terrorists Have Never Been Our Biggest Threat"

"It may seem like a terrible thing to say, but a fair number of people - especially in the news media - are nostalgic about the months that followed 9/11. Some pundits openly pine for the sense of national unity that, they imagine, prevailed in the aftermath of the terrorist attack. More subtly, my sense is that many long for the days when the big threat to America seemed to come from foreign fanatics, not homegrown political extremists.

"But that golden moment of unity never existed; it's a myth, one that we need to stop perpetuating if we want to understand the dire current state of American democracy. The truth is that key parts of the American body politic saw 9/11, right from the beginning, not as a moment to seek national unity but as an opportunity to seize domestic political advantage.

"And this cynicism in the face of the horror tells us that even at a time when America truly was under external attack, the biggest dangers we faced were already internal.

"The Republican Party wasn't yet full-on authoritarian, but it was willing to do whatever it took to get what it wanted, and disdainful of the legitimacy of its opposition. That is, we were well along on the road to the Jan. 6 putsch - and toward a G.O.P. that has, in effect, endorsed that putsch and seems all too likely to try one again. . . .

"In short, by the time the terrorists struck, the G.O.P. was no longer a normal political party, one that considered itself only a temporary custodian of broader national interests. It was already willing to do things that would previously have been considered inconceivable.

"In 2003 I declared that the Republican Party was dominated by "a movement whose leaders do not accept the legitimacy of our current political system." But many people didn't want to hear it. Those of us who tried to point out the abuses in real time were dismissed as "shrill" and "alarmist" . . . .

"But it's not an accident that Republicans today have left both tolerance and respect for democracy behind. Where we are now, with democracy hanging by a thread, is where we'd been heading for a long time.

"America was viciously attacked 20 years ago. But even then, the call that mattered was coming from inside the house. The real threat to all this nation stands for is coming not from foreign suicide bombers but from our own right wing."

Steven Jonas, MD, MPH, MS is a Professor Emeritus of Preventive Medicine at StonyBrookMedicine (NY) and author/co-author/editor/co-editor of over 35 books. In addition to his position on OpEdNews as a â€œTrusted Author,â€ he is a Senior (more...)
Related Topic(s): 911 Anniversary; 911 Attack; Gitmo Anniversary; September 11 Anniversary; September 11 Attacks, Add Tags
Add to My Group(s)
Go To Commenting
The views expressed herein are the sole responsibility of the author and do not necessarily reflect those of this website or its editors.