Teardrop Memorial
(Image by Sculptor, Zurab Tsereteli)   Details   DMCA
>
I wonder how many Americans know about the monument that was created by a renowned Russian sculptor, Zurab Tsereteli, and dedicated as a gift in 2006 by the Russian government in honor of the victims of 9/11. The mainstream western media does not seem to have provided much coverage of the event, if any at all.
Tsereteli's inspiration for creating the memorial is described as follows:

The artist, Zurab Tsereteli, was in his home in Moscow on the morning of September 11th. The television was on as he was getting ready for work and Zurab, like the rest of the world, was glued to coverage of the attacks on the Twin Towers. He watched the towers collapse on TV and was moved to tears.

That day, he went to work at the Academy of Art driving on a route that takes him past the American Embassy. People were gathered outside the embassy gates to pay sympathies, to be together, and to mourn. He saw a mass of crying people and decided to use the image of a tear in a memorial.

He set to work that day on a proper and appropriate form through which to express his feelings over the attack. He went through many various sketches and 'forms' (all of which are chronicled in the yellow book) until finally deciding on the current monument's form.
The website containing a full gallery of photos, information and the full texts of the speeches delivered are here: click here
Text of Dedication Speech by Russian President Vladimir Putin:

Dear Mr. May, Ladies and Gentlemen,

We are here today to lay the cornerstone of a memorial dedicated to the victims of the September 11 terrorist attacks in 2001. At that time, four years ago, the criminals thought they would plunge America and all civilized humanity into chaos. They were wrong. On the contrary, we became more united than ever and we created an actively functioning anti-terrorist coalition. I fully agree with you, Mr. Mayor -- just as we vanquished fascism, so shall we defeat terrorism together.

You know that Russia, like America, has been struck by terrorist attacks on a number of occasions. To be honest, I am not sure that we have done everything we could to immortalize the memory of the victims of these crimes.

Hundreds of my fellow citizens have lost their lives at the hands of criminals: in the bombings of apartment buildings in Moscow and other Russian cities, in attacks against infrastructure facilities and transport, and finally, in the terrible crime perpetrated at Beslan.

I repeat, I am not sure that our country's authorities have done all they could to immortalize the memory of the victims. But this is something that we will do without fail, something that both the current authorities and the future authorities will do. I felt bound to give my support to the initiative proposed by Russian and American citizens to build a monument here to the victims of the 2001 terrorist attacks in New York. This is not just because Russia, perhaps more than any other country, sympathizes with you and understands you, but also because this monument will always be a testimony to our unity in the struggle against common threats.

This will be an impressive monument, but we should never forget that for all their impressive and grandiose nature, such monuments represent concrete individuals, people who will always live on, not only in stone, not only in monuments, but in our hearts.

Thank you for your attention. 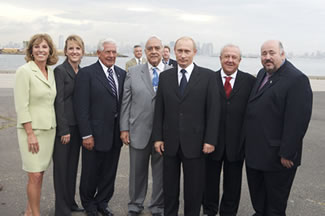 Related Topic(s): Memorial Site; Monument; Russia; September 11 Attacks, Add Tags
Add to My Group(s)
Go To Commenting
The views expressed herein are the sole responsibility of the author and do not necessarily reflect those of this website or its editors.