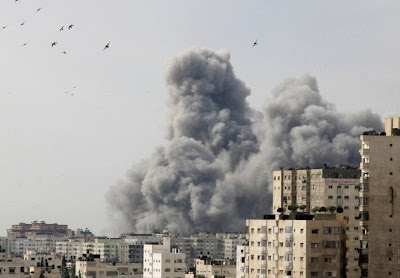 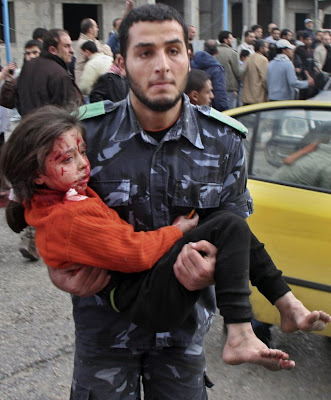 (Image by Unknown Owner)   Details   DMCA
That's right, as of this morning 680 Palestinians have been killed while 10 Israelis have died (at least 4 of them by the Israeli military itself in a friendly fire incident). The wounded numbers are off the charts - several thousand Palestinians and likely about 100 or so Israelis.
It's what you'd call a turkey shoot or shooting fish in a barrel.
Yesterday Israel killed at least 40 people at a United Nations run school they bombed. Israel quickly claimed that Hamas fighters were using the school as a hideout. But this morning a U.N. spokesman said they were 99.9% certain that there were no Hamas at the school and that they had in fact informed Israel about the exact coordinates of the school to ensure it not be hit.
Kind of reminds me of the U.S. hitting the Chinese embassy during the Yugoslavia war - bad maps the U.S. claimed - this in the days of focused satellite images.
Now Israel is saying they will stop the fighting for three hours each day to allow humanitarian aid to be trucked into Gaza. My cynical reaction: as the people attempt to get to the distribution sites they will be killed. This is now happening to ambulance drivers who go out to pick up people who have been wounded. They get targeted.
Obama broke his silence and told reporters yesterday, "We are going to engage effectively and consistently in trying to resolve the conflicts that exist in the Middle East........the loss of civilian life in Gaza and Israel is a source of deep concern to me, and after January 20th I am going to have plenty to say about the issue."
The fact that Obama was forced to make even that weak statement means that the pressure from the peace movement and international outrage is having a bit of impact. We've got to multiply the pressure.
I sent a letter to the editor of my local paper yesterday. For two hours I just sat staring at the computer, completely immobilized by despair after viewing photos and reading articles about the Gaza carnage. The fog that descended on me was part rage and part depression. Finally I crawled out of it and wrote the letter and this morning the editor called and said it would appear in the paper by the end of the week. There have been few letters in the paper about Gaza, adding to my utter frustration, and most of the ones printed so far were of the GO ISRAEL variety.
In these moments I keep pushing myself harder to do something else. I tell myself, "Find some way Bruce to do at least one thing a day."
We can't leave the people in Gaza to suffer this genocide alone.
Watch this video of a courageous Palestinian girl.

Related Topic(s): Gaza; Genocide; Hamas; Hamas; Hamas; Humanitarian; Israel; Israelis; Military; Palestinian; (more...) Peace, Add Tags  (less...)
Add to My Group(s)
Go To Commenting
The views expressed herein are the sole responsibility of the author and do not necessarily reflect those of this website or its editors.