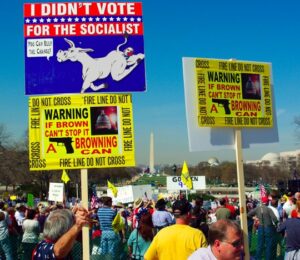 It's been a week for historical references. We began with the Martin Luther King, Jr. birthday remembrance, today marks the 50th anniversary of the inauguration of John F. Kennedy, Jr.

From his inaugural address:

" . . . let us begin anew -- remembering on both sides that civility is not a sign of weakness, and sincerity is always subject to proof. Let us never negotiate out of fear, but let us never fear to negotiate. Let both sides explore what problems unite us instead of belaboring those problems which divide us."

Kennedy was referencing the "Cold War" and arms race with the former USSR, but the words are still significant today as we have entered a media-fueled political cold war that rivals our icy standoff with the Russians in it's threat to our society. 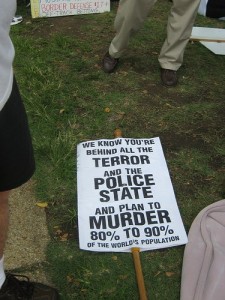 What would JFK think of the gun-fueled rhetoric that flows so easily out of the mouths of the Neocons?  Of Glenn Beck's "jokes" about poisoning Nancy Pelosi or his call to arms against progressive/communist "revolutionaries," urging his listeners to "shoot them in the head?"  Of Michelle Bachmann's urging her constituents to slit their wrists and take a blood oath to defeat health care reform, stating that "I want people in Minnesota armed and dangerous?"  Of Sarah Palin's "don't retreat, reload!" rhetoric and gunshot target marks over Democratic districts? Of Sharron Angle's "Second Amendment remedies," Andrew Breitbart's naming Obama the "Suicide Bomber in Chief?"

The list is endless, and the death toll will continue to increase until something is done to stop the violent madness, fueled by the media, that inspires such mass murder.

Kathy never expected a career in radio as a talk show producer. Born and raised in Atlanta, Georgia, Kathy was completing her nursing degree when in 2001 - in an emergency - she was asked to fill in as the producer of Mike's program. Within a few (more...)
Related Topic(s): Civility; Inauguration; Murder; President John Kennedy, Add Tags
Add to My Group(s)
Go To Commenting
The views expressed herein are the sole responsibility of the author and do not necessarily reflect those of this website or its editors.