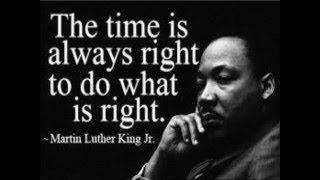 The first time I almost met Martin Luther King, Jr., would have been at his father's Ebenezer Baptist church, in Atlanta, Georgia. I was one of three Emory University seminary students assigned to visit MLK, Sr's church. We were part of a class called Race.

After the Sunday morning worship service, MLK, Sr., took us to his office for an interview. As we were leaving, Dr. King invited us to return the following Sunday, adding, "My son Martin will be delivering his first sermon after receiving his Ph.D. from the Boston School of Theology."

None of us returned. That missed opportunity remains at the top of my personal list of Bad Decisions While Growing Up.

I told that story to MLK, Jr., when, as editor of the Christian Adocate, a United Methodist pastor's magazine, I interviewed him more than a year before his assassination on a Memphis, Tennessee, motel balcony.

He was killed 50 years ago this Wednesday, April 4, 1968, shot by a lone gunman from a window in a nearby boarding establishment.

What prompted my request for an interview in Chicago, was the publication of an essay which had focused on King's decision to broaden his movement's civil rights focus to include opposition to the war in Vietnam and the issue of poverty.

Were Vietnam and poverty the issues that prompted that evil moment when King died? King had long faced powerful forces that wanted him shut down. James Earl Ray fired the shot that ended the life of a civil rights icon.

What the shot did not do was end the movement King inspired.

King was in Memphis to fight for a wage increase for the city's garbage workers. This fight was part of King's effort to broaden his civil rights movement to include poverty as part of his Poor People's Campaign initiative.

In his final speech The New York Times recalls King's words that continue to inspire us to action.

"In the speech delivered the night before his death, Dr. King declared: 'The issue is injustice. The issue is the refusal of Memphis to be fair and honest in its dealings with its public servants, who happen to be sanitation workers.'"

It was King's Dream to lead this nation toward peace and justice. His life ended on April 4, 1968, but one half-century later, Penn State's Joshua Inwood insists, "With over 43 million people living in poverty in the United States today, King's ideas still hold much power."

As Inwood wrote in his essay, King was a leader who understood the necessity of taking the long view:

"In the last three years of his life and ministry King had grown frustrated with the slow pace of reform and the lack of funding for anti-poverty programs. In 1966, for example, King moved to Chicago and lived in an urban slum to bring attention to the plight of the urban poor in northern cities. His experiences in the South had convinced him that elimination of poverty was important to winning the long-term battle for civil and social rights."

Related Topic(s): Injustice; Issues; Martin Luther King Jr; Rights, Add Tags
Add to My Group(s)
Go To Commenting
The views expressed herein are the sole responsibility of the author and do not necessarily reflect those of this website or its editors.