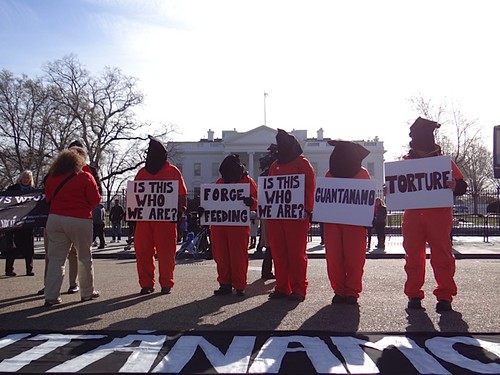 January 11, 2018, marked the 16th year that Guantanamo prison has exclusively imprisoned Muslim men, subjecting many of them to torture and arbitrary detention.

In Washington, D.C., about 30 people have gathered this week as part of Witness Against Torture, for a weeklong fast aimed at closing Guantanamo and abolishing torture forever. Four days ago, Matt Daloisio arrived from New York City in a van packed with posters and banners, plus sleeping bags, winter clothing, and other essentials for the week.

Matt spent an hour organizing the equipment in the large church hall housing us. "He curates it," said one organizer.

None of the 41 prisoners now in Guantanamo was captured by the U.S. military on a battlefield. Afghan militias and the Pakistani military were paid cash bounties for selling most of these prisoners into U.S. custody. Imagine the "green light" this gave for other countries to engage in the buying and selling of human beings.

Aisha Manar of the London Campaign to Close Guantanamo points out that "the rights-violating practices surrounding Guantanamo are now a model for the detention and incarceration policies of the U.S. and other states."

This chilling reality is reflected in Associated Press reports revealing that the United Arab Emirates operates a network of secret prisons in Southern Yemen, where prisoners are subjected to extreme torture. This has included being trussed to a rotating machine called "the grill" and exposed to a roasting fire.

"Nearly 2,000 men have disappeared into the clandestine prisons," the AP reports, "a number so high that it has triggered near-weekly protests among families seeking information about missing sons, brothers and fathers."

One of the main detention complexes is at Riyan Airport in Yemen's southern city of Mukalla. Former detainees, speaking on condition of anonymity, told of "being crammed into shipping containers smeared with feces and blindfolded for weeks on end. They said they were beaten, trussed up on the "grill," and sexually assaulted."

A member of the Yemeni security force set up by the United Arab Emirates told AP that American forces were at times only yards away.

"It would be a stretch to believe the U.S. did not know or could not have known that there was a real risk of torture," Lynn Maalouf, Amnesty International's director of research in the Middle East, said in a June 2017 statement.

On January 9, 2018, Witness Against Torture members tried to deliver a letter to United Arab Emirates Ambassador Yusuf Al Otaiba, seeking his response to these reports. Security guards took our pictures but said they were unable to accept our letter.

Today, joining numerous other groups for a rally in front of the White House, we'll carry one banner that says, "It would take a genius to close Guantanamo." Another says, "We are still here because you are still there." Clad in orange jumpsuits and black hoods we'll also carry placards bearing the number "41."

A version of this article was first published on The Progressive website.

Related Topic(s): Guantanamo Prison; Muslim; Prisoners; Torture, Add Tags
Add to My Group(s)
Go To Commenting
The views expressed herein are the sole responsibility of the author and do not necessarily reflect those of this website or its editors.