"In the studies that I have examined on the impact of the Maharishi Effect [the Invincible Defense Technology] on conflict, I can find no methodological flaws, and the findings have been consistent across a large number of replications in many different geographical and conflictual situations. As unlikely as the premise may sound, I think we have to take these studies seriously."

--Ted Robert Gurr, Ph.D., Emeritus Professor of Government
and Politics at the University of Maryland


"The hypothesis definitely raised some eyebrows among our reviewers. But the statistical work is sound. The numbers are there. When you can statistically control for as many variables as these studies do, it makes the results much more convincing. This evidence indicates that we now have a new technology to generate peace in the world."

--Raymond Russ, Ph.D., Professor of Psychology at the
University of Maine; editor, Journal of Mind and Behavior

"I have been following the research on the Maharishi Effect [the Invincible Defense Technology] as it has developed over the last twenty years. There is now a strong and coherent body of evidence showing that [this approach] provides a simple and cost-effective solution to many of the social problems we face today. This research and its conclusions are so strong, that it demands action from those responsible for government policy."

There are no obvious disadvantages in establishing a Prevention Force. Day by day the advantages of TM and IDT are becoming more and more evident and it is only a matter of time before all countries have Prevention Forces. The only question is when this will happen. IDT has already been proven to work in Mozambique, the Balkans, Germany, and the Middle East, as well as various other theatres. As the SANDF is in transition, it would appear that now is the opportune time to take the first step in applying this system that works, thus setting the pace for the rest of Africa. 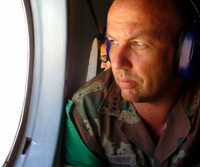 
Maj W.G. Klokow (SAIC) is an infantry major at 6 SA Infantry Battalion (Air Assault). His duties have included work as an AU/UN military observer and peacekeeper. Maj Klokow is the first person in the SANDF to be awarded the new Air Assault Badge. He publishes the blog Soldier of Africa http://rsasoldier.blogspot.com