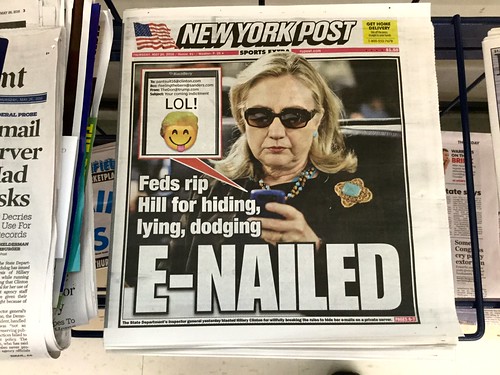 "Why are you digging up dirt on Hillary, why are you feeding into Trump's fear mongering? If we want to take advantage of the revolution that Bernie started, we need to partner with Hillary. If President Obama and Senator Warren can support Hillary, I think it is time for you to get off it.

Here's my reply:
There are 35 days until the Democratic convention. That is when the democratic candidate will be voted on, in spite of the PR campaign Hillary and her MSM and DNC allies have been selling that Hillary is already elected. That is when the delegates and Superdelegates will actually vote to select the Democratic presidential candidate. Bernie Sanders is still in the race.
I believe, as do millions of Sanders supporters, that Hillary is a criminal and probably hiding that she's already had a stroke, now taking a very powerful drug used to prevent strokes.
Why would you want such a vile candidate? And she didn't win, she worked with the DNC to rig and steal the election. She was not elected. She did not win a majority of the popular vote as she claims. That is a disingenuous claim, considering that there were many states that held caucuses not primaries. Just because Clinton's mainstream media co-conspirator allies also sold that fiction does not make it true. And then there are those 2.5 million uncounted or unreported votes from California. There's no way of knowing if Hillary won California or not.
So, I am doing all I legally can to prevent her from becoming the candidate. That includes digging up dirt on her. Whatever dirt I dig up will surely be found independently and used by the GOP candidate. If Hillary can't handle the heat from Bernie supporters, how will she handle the heat from the team which will spend a billion dollars opposing her?
Bernie Sanders is an honest man who offers hope to break out of the hold the system, the top down, powers-that-be establishment, have on the US, the system that has been grotesquely subverting democracy, the system that Hillary embraces and will continue to support and enable.
We have 34 days to keep HIllary from becoming the candidate. I will do everything in my power to stop that from happening, primarily casting light on her lies, crimes and other liabilities and flaws that make her the wrong candidate.
As far as people who have shifted from supporting Bernie to supporting Hillary go, have you no courage of your convictions? How can you support, before the actual vote by delegates, of someone who is such a bad candidate? Don't tell me about facing reality. The reality is, anything can happen between now and the first vote at the Democratic convention in Philly.
What are you going to do about this?

Related Topic(s): Bernie Sanders 2016 Presidential Candidate; Crooked Hillary Clinton; Democratic National Convention; Hillary Clinton, Add Tags
Add to My Group(s)
Go To Commenting
The views expressed herein are the sole responsibility of the author and do not necessarily reflect those of this website or its editors.