Click Here to Remove All Ads
31 allegations against Bishop of Sioux City, a pedophile who preyed on young boys, though Iowa diocese does its best to hide the story
*

“Uh-huh, there are 31 credible accusations against Soens,” Janet Clark said, so I went to the Davenport Iowa Catholic diocese website and there it was here. "Acused by 31 male minors."

(Image by Unknown Owner)   Details   DMCA
The November 3, 2008, press release barely mentions retired bishop Lawrence Soens (pictured at left). Instead the diocese headline reads: “Msgr. Drake Shafer found not guilty of abuse,” with a nice little bio of the one monsignor who was found Not Guilty in the recent diocese review board report. You have to go to the Amended List of Accused Priest Assignments at the home page and then go down to the middle of page 2 in the middle of a chart to find out about the midwestern bishop: "Lawrence Soens: Accused by 31 male minors."

“The Review Board found that certain allegations of sexual abuse against Retired Bishop Lawrence Soens are credible," reads a paragraph in the middle of the previous page of the pdf file and continues: "Then-Father Soens was accused of sexually abusing students at Iowa City Regina High School in the 1950's and 1960's when he was its Principal. He was also accused of sexually abusing a male minor when he was rector of St. Ambrose Seminary. The Review Board did not review all of the allegations against him because some claimants did not want their claims reviewed by the Board.”

That paragraph makes it appear there was maybe one more allegation at Iowa Regina High School, and then one more from St. Ambrose Seminary. Then the news release about the review board report came out on November 3rd when almost everyone in the United States was focused on the presidential election.

“That decision came out Monday, right before the election," Clark said, "and of course nobody heard a thing about it."

When the news broke on Monday, SNAP contacted Clark, who is a survivor from Iowa herself. She said the survivors watchdog group contacted the media, and when Janet arrived, “There were three TV stations and several print reporters there. Every news outlet in Sioux City was there.

"I felt really good about it.”

Janet went on: “I went over there to protest the way Sioux City has handled him.

"In June 2005 their Catholic magazine The Globe printed an article saying Soens was innocent - in 2006 their current bishop Walther Nicholas wrote an article saying he was sorry for the victims but the article was another very pro-Soens. 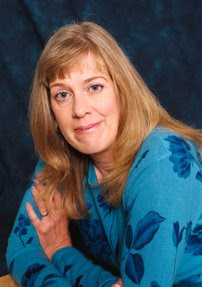 (Image by Unknown Owner)   Details   DMCA
“I wrote in my journal that I got a copy of the Globe and saw this article and was mad about it.” Clark, in picture at right, sent me the entry from her journal:

Quote from my journal:

June 2005 Inside (the Globe, Sioux City diocese newspaper) was a story about a former bishop, Laurence Soens, who's been accused of sexual abuse, surprise, surprise. The article was all pro-Soens--the people are behind him, he's denying the allegations, etc. etc. BLAH! The newspaper struck me as full of contridictions- articles proclaiming good moral values, like canceling the debt in poor nations, and celebrating the Catholic community, and yet this continued hideous treatment of abuse victims. I felt really raw, in alot of pain.

Janet Clark has written a fiction novel, Blind Faith, which is about priest sexual assault, for more information go to http://www.janeteclark.com/

Her Throat literally opened back up:

Wordsmith working in TV production in Los Angeles. Also free lance journalist with an active blog. Old enough to have demonstrated against the Vietnam War but still young enough to dance.
Related Topic(s): Catholic; Pedophiles, Add Tags
Add to My Group(s)
Go To Commenting
The views expressed herein are the sole responsibility of the author and do not necessarily reflect those of this website or its editors.