SF: Will Mr. Bharara move forward with this? Could this take place before the July convention? Could Americans wait again for the highest level of judicial decisions to deliver the presidency like we saw back in those hanging chad days in Florida? In the interest of justice and those long overdue reforms, we are prepared to wait again. 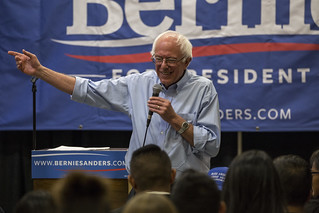 JB: How has the media related to all of this in terms of reporters and editors?

SF: Certainly, a federal order for a new NY primary does not at all depend on establishing the criminality of what happened, who gets indicted, etc. There are so many unanswered questions. I recall asking the news editor of the NYC Associated Press Bureau how many times they had spoken with the two ladies who took the rap for the purging, and what did they have to say about who pressured them or bribed them. He replied that they had never talked to them at all.

For all of its prowess and high circulation numbers in the media world, New York is truly at the epicenter, the source, and the capital of media blind-spots about this phony primary election, and I don't understand why.

Are all Americans and New Yorkers in particular anesthetized and inoculated against any more scandals involving the front runner? Can you acquiesce to a third of a million missing votes, shrug your collective shoulders, and say "Whatever"? (If this happens in California, they will shrug their shoulders and say "Have a nice day.")

The newspapers with the largest circulation in America are wallowing in their New York-o-centric pundits who really are servile, whether they admit it or not, to the very conservative financial interests who don't want to see Bernie in the White House out of their fear for his long overdue reforms, the most honest and trustworthy man who has run for the presidency since I became politically active at the age of 12 in 1960 when I hung things on doors for John Fitzgerald Kennedy.

JB: Do you have a message for journalists who are covering this election?

SF: Please take a serious look into what may become the next HRC scandal, and perhaps her last. Knowing about all of this has caused even the WS Journal as late as June 1 to doubt that she will be the nominee.

Read this incisive letter from Alison Landes to Preet Bharara details what no newspaper is ready to reveal, despite knowing all about it. After total silence from Mr. Schneiderman, the original designee of the moveon.org petition, we have turned to Mr. Bharara as the last resort, but Bernie's lawyer, Brad Deutsch, may also have something to say in Federal Court about the hijacked NY primary, as well.

JB: Are the California and New Jersey primaries about to be hijacked?

SF: What happened in New York's primary in due course will make Watergate look like stealing a paper clip from the teacher's desk, and I pray it won't be repeated again in California and New Jersey.

JB: If you could talk to Bernie for a brief moment, what would you say to him?

SF: Thanks for bringing democracy back to life.

1. Don't let these voting "irregularities" get swept under the rug and forgotten. Your strongest supporters feel abandoned. Speak up loudly and clearly and frequently before the convention. This isn't coming from the "cult of sore losers," as Frank Bruni put in the New York Times.

STAY IN THE KNOW
If you've enjoyed this, sign up for our daily or weekly newsletter to get lots of great progressive content.
Series: "Activism"