Those were U.S. troops killed in combat during an invasion. The Iraqi Shia militias whether Iran backed or not had every legal right to fight the U.S. invasion. The idea that the killing of invading American troops was somehow illegal or illegitimate is risible. Plainly the U.S. propaganda that Soleimani was "responsible for hundreds of American deaths" is intended, as part of the justification for his murder, to give the impression he was involved in terrorism, not legitimate combat against invading forces. The idea that the U.S. has the right to execute those who fight it when it invades is an absolutely stinking abnegation of the laws of war.

As I understand it, there is very little evidence that Soleimani had active operational command of Shia militias during the invasion, and in any case to credit him personally with every American soldier killed is plainly a nonsense. But even if Soleimani had personally supervised every combat success, these were legitimate acts of war. You cannot simply assassinate opposing generals who fought you, years after you invade. 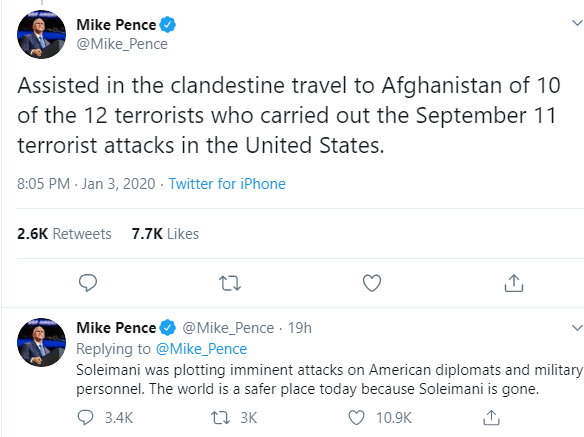 The final, and perhaps silliest lie, is Vice President Mike Pence's attempt to link Soleimani to 9/11. There is absolutely no link between Soleimani and 9/11, and the most strenuous efforts by the Bush regime to find evidence that would link either Iran or Iraq to 9/11 (and thus take the heat off their pals the al-Saud who were actually responsible) failed. Yes, it is true that some of the hijackers at one point transited Iran to Afghanistan. But there is zero evidence, as the 9/11 report specifically stated, that the Iranians knew what they were planning, or that Soleimani personally was involved. This is total bullshit. Sept. 11 was Sunni and Saudi led, nothing to do with Iran.

Soleimani actually was involved in intelligence and logistical cooperation with the United States in Afghanistan post 9/11 (the Taliban were his enemies too, the Shia Tajiks being a key part of the U.S.- aligned Northern Alliance). He was in Iraq to fight ISIL.

The final aggravating factor in the Soleimani murder is that he was an accredited combatant general of a foreign state which the world including the U.S. recognizes. The Bethlehem Doctrine specifically applies to "non-state actors." Unlike all of the foregoing, this next is speculation, but I suspect that the legal argument in the Pentagon ran that Soleimani is a non-state actor when in Iraq, where the Shia militias have a semi-official status.

But that does not wash. Soleimani is a high official in Iran who was present in Iraq as a guest of the Iraqi government, to which the U.S. government is allied. This greatly exacerbates the illegality of his assassination still further.

The political world in the U.K. is so cowed by the power of the neo-conservative Establishment and media, that the assassination of Soleimani is not being called out for the act of blatant illegality that it is. It was an act of state terrorism by the U.S. pure and simple.