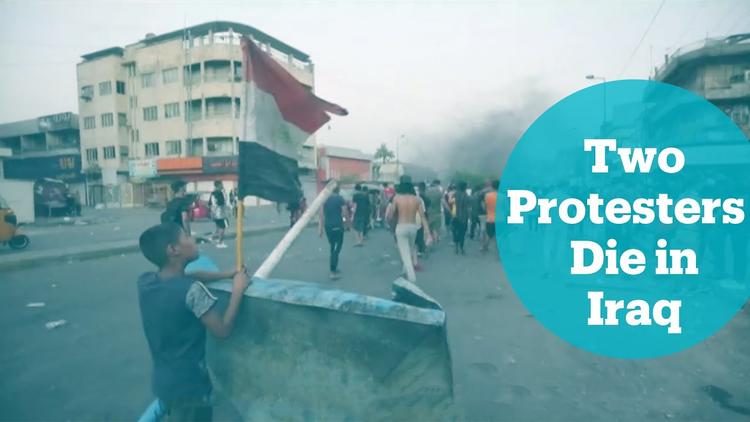 On Tuesday, the temperature in Baghdad hit 124° F. (51.2°). Just for perspective, the all-time highest temperature recorded for Asia was in Kuwait five years ago, at 129° F. Scientists consider an average temperature of 95° the highest consistent with habitability.

Since these temperatures and higher will become more and more common in the coming century if we don't immediately stop burning coal and petroleum, Iraq's very viability as a country is in doubt. It isn't only a matter of living with the heat. That kind of heat increases vaporization of fresh water, and the climate emergency brings with it increased drought. The southern riparian port city of Basra only has an elevation of 16 feet, and southern Iraq generally is low-lying and vulnerable to sea level rise (the oceans are expected to rise four to six feet by the end of this century).

A third protester was killed on Tuesday when he was struck in the head by a tear gas canister fired by security forces. Protests have returned to Baghdad's Tahrir Square (Liberation Square) since Monday night when a big crowd gathered to protest electricity power outages and two protesters were killed and 20 were injured by security forces, enraging the youth. Prime Minister Mustafa al-Kadhimi pledged an investigation into Sunday's deaths, saying that security forces were not authorized to use live fire. Protesters also want early elections and an end to Iraq's sectarian-based spoils system.

Power outages have left the population without air conditioning or even fans in the deadly heat. In Karbala, protesters against the lack of electricity blocked the main roads connecting Karbala Province to Babel Province. Electricity protests have broken out elsewhere in Iraq, as well. Iraq lacks enough power generators, which take five years and billions of dollars to build. (Wind and solar farms can be constructed more quickly and more inexpensively, but Iraq's ruling elite, heavily dependent on petroleum, have shown little interest in green energy).

A lot of Iraq's electricity comes from Iran, and the Trump administration is pressing Iraq to cut that country off as soon as it can (it can't).

Nor can the country swing into action with a big infrastructure program right now, since oil sales and therefore income have plummeted because of the global coronavirus recession.

The United States illegally invaded Iraq under false pretenses in 2003, promising to reconstruct it as a shining beacon on a hill. US sanctions had harmed infrastructure, and then US bombing harmed it further. Although the Bush administration made a show of infrastructure projects, they were dwarfed by the money spent on bombing Iraq into submission, and the US left Iraq with too little electricity generation capacity. Iraq has been left a basket case with a nearly failed state, a highly corrupt ruling elite, and not so much as reliable electricity.

The US was looking for petroleum wealth in Iraq, at least indirectly, at a time when ExxonMobil and other oil giants knew very well that burning their product wrecks the earth.

Ironically, the very source of Iraq's wealth is subjecting it to unbearable, torrid summers that will likely get worse in coming decades. But Iraq burned relatively little petroleum -- it was the industrialized countries such as the United States that unleashed hundreds of billions of tons of heat-trapping carbon dioxide into the atmosphere.

Related Topic(s): Climate Change; Climate Crisis; Climate Heating; Electricity; Iraq Casualties; Iraqi Government; Protest, Add Tags
Add to My Group(s)
Go To Commenting
The views expressed herein are the sole responsibility of the author and do not necessarily reflect those of this website or its editors.