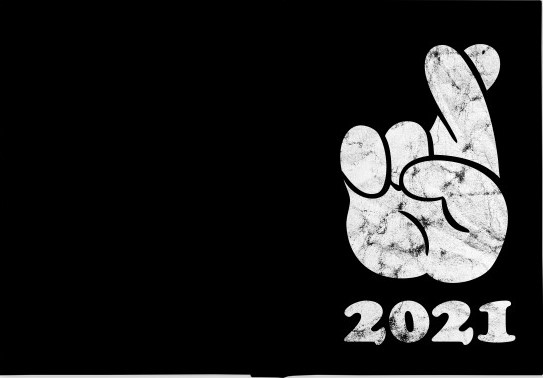 2020 was an annus horribilis in so many ways: wide-spread corruption, systemic violence, raging social unrest, a pandemic, ineffective gov't and a frightening consolidation of corporate power. Nothing felt normal, nothing redeeming, nothing but a year's worth of reflections lined up like felonies. "The best lack all conviction, while the worst / Are full of passionate intensity." Bernie Sanders meet Donald Trump. The good news is there are lessons to put into practice for the new year.

Watch Less Basketball
To those of us working-class brats who spent our youth shooting hoops, who sublimated lean days to the game in a way that felt spiritual, basketball is sacred. To the money-men who control college and professional b-ball, not so much. They're investors. They're concerned about profit margin. They don't give two shakes about the game.

Exhibit A: March Madness used to be the wildest, most enjoyable two weeks of the year. Small college venues packed to the rafters with young men and women painted in their school colors and going bananas for their team. The "crazies," right? School spirit times twenty. The NCAA changed all that, forcing schools to play every game in vacuous stadiums and filling most of the seats with reporters, conglomerate-types and middle-aged tourists waiting for a bus. Worse, they banished students to restricted areas behind each basket. The students? The folks who put the Madness into March? Move them to the back so you can sell more tickets? Disgraceful!

Pro-ball is no better, a sport dominated by hucksters and blasphemers. They allow ads on uniforms. They stream corporate graphics along the sidelines. They graffiti the floor with company logos. They run split-screen commercials DURING THE GAME! They hire former players like Chris Webber, "C-Web," a liar, a cheat and a repeat offender who once got caught trying to bring pot into the country and who, naturally, blamed it on his girlfriend. Or the truly despicable Isiah Thomas. Never mind that Thomas was so reviled as a player no one wanted him on the Dream Team. As coach of the Knicks he was sued by Anucha Browne Sanders, the team's Vice President for Marketing, for creating a "hostile work environment based on sex" (his behavior included repeatedly calling Ms Sanders "b*tch"). Minutes after a jury had found him guilty, a delusional Thomas declared he was "innocent of all charges." The same can be said of Kobe Bryant. The NBA continues to spin a fantasy: he's a role model, he's worthy of our admiration, the self-styled "Black Mamba," basketball icon and the perfect teammate, father, husband, friend, teacher, provider, whatever. Fact check: Mr Mamba was sued for divorce in 2011 because, according to the suit, he'd had affairs with "105 women" over a ten-year period. Not to pour salt on the truth, but the cheating continued even after the guy was sued for sexually assaulting a hotel worker in 2003. Heroes? Role models? Time to pull the plug.

Watch Less (Corporate) TV
It's not just sports pushing phony role models. Corporate-controlled TV does the same. Case in point: Ellen DeGeneres, she of the popular television show. Ms DeGeneres got caught hanging out with noted war criminal George W. Bush and initially tried to defend herself. She believes in being "nice" to everyone, she told reporters. But apply her logic to Putin or Erdoǧan or Rouhani or Xi and the con becomes obvious. Would she be up for having a beer with Mao or Stalin? Thankfully, after Ellen's public comments, current & former staff revealed her sugary surface was nothing more than a PR invention. Backstage she's Ebenezer Ellen. How gratifying in a schadenfreudian kind of way to see the curtain fall.

Then there's Stephen Colbert, current host of "The Late Show" and formerly a liberal lion. "Truthiness," you remember. He's the comic who had the courage to talk subversion to the monster-in-chief, to his face, in real time. Forget all that. He's become what he parodied, a cowardly court jester jigging to the neo-liberal two-step. He's gone over to the dark side, a proven boot-licker willing to prostrate himself in praise of a cold-blooded assassin. There are plenty of others, sweet-faced scoundrels who poison the airways on behalf of their sleazy corporate overseers: Rachel Maddow, Chris Hayes, Jake Tapper, Nicole Wallace, Lawrence O'Donnell, Chuck Todd, Wolf Blitzer, Joy Reid, Anderson Cooper, Chris Cuomo, Erin Burnett, Joe Scarborough, Mrs. Greenspan and on and on and on. How do these people live with themselves? Easy. It's the money.

Watch Fewer (Reactionary) Films
Make a sincere effort not to watch any films acted in, or created by racists, misogynists, torture apologists, genocide supporters or religious bigots. Will not watch Wonder Woman or Wonder Woman 1984; the star in both is an unapologetic supporter of state-sponsored murder. (Ask Palestinian children whether they think Gadot is an appropriate role model.) Will not support any project involving Bradley Cooper, Jessica Chastain, Ryan Reynolds, Kathryn Bigelow, John Krasinski, Clint Eastwood, Jon Voigt and any other Hollywood insider who is cool with disguising US propaganda as screen drama. Assassins, torturers, predators, hired guns, genocidal thugs and pathological killers. You're welcome to the lot of them.

In addition, what with Christian fascists on the prowl, from Mike Pence and the Proud Boys to Brett the Boffer and Amy "Offred" Barret, avoid visual narratives that force-feed audiences superstitious drivel. The (yawn) cosmic struggle between good and evil has practically taken over the horror genre. God on one side, devils on the other and humans twisting slowly in-between, helpless without supernatural intervention. Yes of course. We're either foot soldiers for Satan or slaves to a celestial dictator. Sweet. (For context: Gothic literature began, in part, as a critique of the post-industrial home as a center of patriarchal control: Anne Radcliffe's The Mysteries of Udolpho (1794) is an excellent place to start. To Emily St Aubert the home is not a nurturing, loving, protected space but a maze-like prison of a thousand rooms and passageways, dark and inscrutable, with no way out, in which powerful men can kidnap, torture and sexually assault her with impunity.)

Films such as Winchester, The Exorcism of Emily Rose, The Conjuring, It Follows and Truth or Dare are christian wet-dreams desperate to convince viewers their myth-making is history. Favorite storyline: the protagonist is a non-believer who must investigate a supernatural event and who, in the course of investigating, becomes a true believer. Proselytizing on the big screen. In the end Carolyn and Roger believe the Warrens. Kelly and Paul believe Jay. Dr. Price believes Sarah Winchester. Erin believes Father Moore. Ghosts really do exist. Malicious spirits really do interact with objective reality. Demons really do possess human bodies.

Don't be fooled. Evil exists all right. Anneliese Michel, for example, the young woman on whom the Emily Rose story was based, was tortured to death by two Catholic priests, Arnold Renz and Ernst Alt, who not only believed that Satanic possession was real but that only a medieval religious ritual could cure it. They confessed as much at trial. An autopsy revealed Ms Michel died of malnutrition and dehydration. She had pneumonia and both her knees were broken. She weighed 68 pounds. Favorite quote: "God intended for us to fight evil together." It's just a suggestion, but maybe they could start with the films.

Watch Fewer (Fake) Progressives
It's not just right-wing cork-heads like Sean Hannity, Tucker Carlson, Chris Wallace, Laura Ingraham, Jeanine Pirro and everyone on Fox and Friends who get paid to push hard-right baloney. The pushers include fake progressives Cenk Uygur, Ana Kasparian and Sam Seder. Cenk gets $20m from a Hillary supporter to channel "Russia-gate," Ana smears Jimmy Dore while sharing a huggy-hug with Madeline "half a million dead Iraqi children" Albright, and Sam the Sham allows two Neanderthals to spew lies about an actual, real-life progressive. One of these jerks offered to fight Dore in a parking lot. Just so you know.

Special attention, though, must be reserved for AOC and the "Fraud Squad," the phony progressives Dore called out for refusing to force Speaker Pelosi to bring M4A up for a floor vote. The bill wouldn't pass, but a vote would show who was willing to fight for the policy and who wasn't. Now we know. And while we're at it, let's not forget Mr "Hope and Change" himself, former-president Barack Obama, lead player in the ongoing effort to bamboozle the present by re-writing the past. He's a centrist. He's a moderate. He's a family man. He didn't start disastrous wars, assassinate US citizens, shred Habeas Corpus, consolidate military-state power, increase illegal surveillance, support anti-worker trade deals, have whistleblowers imprisoned and tortured or blame black people for police violence. He's (cough cough) an elder statesman. Millions of Black Americans lost their homes while he and his family got to move into a $12m estate on Martha's Vineyard. A soul-less Praetorian gate-keeper, the walking, breathing simulation of a simulacrum.

There it is. Whatever the risks, whatever the consequences, a sincere effort to honor the resolutions listed above has already begun. To quote Mad Will: "If the fool would persist in his folly he would become wise." Let's hope so.

Related Topic(s): Catholic; Obama; Propaganda; Torture; Women, Add Tags
Add to My Group(s)
Go To Commenting
The views expressed herein are the sole responsibility of the author and do not necessarily reflect those of this website or its editors.