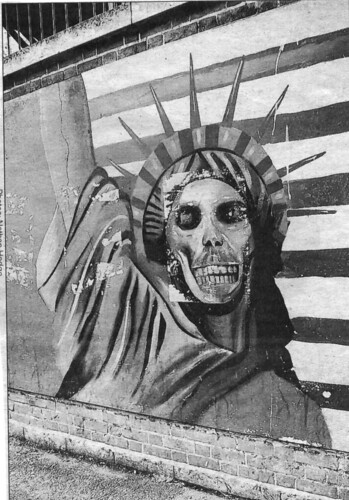 THE FACE OF IMPERIALISM
(Image by vaticanus)   Details   DMCA

This election is a contest between two wings of the U.S. capitalist ruling class: the ones who want nationalistic protectionism, and the ones who want to return to the Obama-era paradigm of liberal international cooperation. Throughout the last four years, Trump's reckless and isolationist fascism has damaged U.S. imperial power by weakening U.S. relations with Europe and damaging America's global reputation, which is why the pro-Biden wing of the ruling class wants Trump to lose.

To help disrupt the system as much as is doable within the parameters of electoral politics, this year I'm voting for the Marxist third party candidate Gloria La Riva. But given the extremely tense nature that this ruling class rivalry has taken on, there's nothing I can do to stop the country's decaying facade of a "democracy" from further falling off.

Trump and his team are fully prepared to steal this election, one way or another. Trump and the GOP have been purging voters from the rolls and making it harder for people to vote by mail. Already, Trump has manufactured a funding crisis for the U.S. Postal Service with the goal of suppressing the vote. To help ensure that this will result in the appearance of victory, Trump plans to declare victory on Election Day before final results are tallied, and to disqualify as many mail-in ballots as possible. Trump's efforts to encourage future right-wing vigilante shooters like Kyle Rittenhouse (who the White House has been portraying as a hero) is clearly part of a campaign to build up a presence of pro-Trump militias who can intimidate election officials and pro-democracy protesters. Trump's instruction at this week's presidential debate for the white supremacist militia the Proud Boys to "stand back and stand by" confirms this.

As a last resort, Trump will declare the election "rigged" and refuse to leave office, something that he'll try to pull off by inciting his supporters to commit violence. This will be the outcome if Republican voter suppression doesn't work as well as it did in 2016. And whichever candidate is sworn in next year, this election will serve as a catalyst for the further erosion of democracy and freedom.

You can't expect otherwise in a situation where the two factions of the imperial core are engaging in a struggle for power that's just one dispute away from escalating into massive violence. This is a battle between oligarchic sects that are both ready to resort to drastic measures. The nationalist wing is prepared to unleash militia violence, fueled by misinformation from the president and by far-right conspiracy theories like QAnon. The internationalist wing is prepared to use the intelligence agencies to engage in widespread censorship and McCarthyist persecution of dissidents, justified through media propaganda about how the U.S. is supposedly being destabilized by foreign powers.

The Orwellian propaganda tactics of the latter faction were just demonstrated by a tweet from CNN pundit Wolf Blitzer, who proclaimed: "You know who probably loved the debate last night? Russia, China and Iran. The U.S. intelligence community says they've been trying to sow political discord in the U.S. for years. Their goal: to create political chaos and weaken the U.S. They probably said: Mission Accomplished." This kind of paranoid and xenophobic rhetoric will continue to be ratcheted up by our political and media establishment after the election, allowing for power grabs that will be equally dangerous whether Trump or Biden wins.

After the 2016 election, the U.S. media went into a years-long frenzy over "Russiagate," the ultimately evidence-lacking conspiracy theory that Trump had colluded with Russia in order to win the election. At the behest of the intelligence agencies, Facebook, Twitter, Google, and YouTube imposed ever-tighter censorship policies, systematically driving down the viewership of anti-imperialist, anti-capitalist, and pro-social justice media outlets. In 2017, the DHS also forced RT America to register as a foreign agent, furthering the atmosphere of intimidation towards radical or foreign journalists. Since last year's Mueller report proved Russiagate's skeptics right, there's been an ongoing paradigm where websites and social media accounts which challenge the State Department line are silenced by these tech companies.

To help manufacture consent for this escalating crackdown on freedom of information, the corporate media and the intelligence agencies have been frequently warning of operations by Russia, Iran, and China to interfere in the 2020 election. With the baseless claim from this June that Russia has offered bounties to the Taliban for killing U.S. troops in Afghanistan, Russiagate and its militaristic messages have been adapted to the current era. CIA-tied outlets like the Washington Post have also been claiming that Russian "disinformation" campaigns are tied to the Black Lives Matter protests. Whatever chaos ensues in the coming months and years, whether it's an attempted coup from a fascist sitting president or new waves of lower class revolt, it will also be portrayed as part of an insidious scheme by Washington's adversaries. A Trump victory will be yet another opportunity for the media to sensationalize about how the U.S. is being subverted by foreign actors, and how the voices of dissension implicitly need to be crushed.

The unprecedented surveillance, policing, anti-whistleblower, and military resources that the president has gained in these last four years will come in handy for a dictatorial crackdown amid this tense post-election environment. The consequence of Russiagate, and of the other propaganda campaigns of Washington's Cold War 2.0, is that the military and militaristic thinking are getting more and more integrated into American society. The 2021 Pentagon budget, which accommodates both the ongoing U.S. wars in the Middle East and the increasing military buildup against Russia and China, is what's come from this descent into a paradigm of escalating war. These cold war advancements, along with the increasing censorship against radical voices, all tie in with the police brutality and deterioration of democracy that the country is now experiencing.

For socialists, anti-war activists, colonized peoples, the poor and working classes, immigrants, and the other disfavored or marginalized groups within the country, all of this will mean even more uncertainty and danger. As Covid-19 death rates in the U.S. remain steady, and as the country heads into a double-dip depression, the conditions for the lower classes continue to deteriorate. And the crackdown from the state will get even more deadly as the potential for unrest continues to grow.

This war between the rival factions of the imperial core, with all its byproducts of censorship, intelligence agency crackdowns, and a toxic and McCarthyist political discourse, will further drag our society into authoritarian late-stage capitalism.

Related Topic(s): Censorship; Democracy; Election; Intelligence; Media; Russia; Russiagate; Trump, Add Tags
Add to My Group(s)
Go To Commenting
The views expressed herein are the sole responsibility of the author and do not necessarily reflect those of this website or its editors.