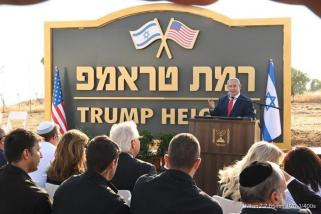 Israeli Prime Minister Benjamin Netanyahu said it was a 'historic day' during the unveiling Sunday of Trump Heights, a new, yet-to-be-built community in the disputed Golan Heights.
(Image by Photo courtesy of U.S. Ambassador to Israel David Friedman/Twitter)   Details   DMCA

On Sunday, June 16, leaders of the nationalist bromance between Israel and the Trump government took one small step for tyranny and one huge step for "in your face" diplomacy.

In case you missed it, UPI circulated the story that Israel had ceremoniously named a small Golan Heights future settlement, "Trump Heights," to honor the best friend Israel has ever had in the Washington, D.C. White House.

Israeli Prime Minister Benjamin Netanyahu was joined in the naming ceremony by U.S. Ambassador David Friedman. (The picture above is his.)

It deserves further attention. As anyone with even the slightest grip on reality is aware, the as-yet-undeveloped settlement of "Trump Heights" is not in Gaza or the West Bank, where Israel has spent decades developing settlements on stolen Palestinian land.

It is on occupied Syrian land. UPI quotes President Trump as he ignores that reality: "Trump said the United States' recognition of Israel's sovereignty of Golan Heights 'was a long time in the making' and should have occurred decades ago."

The Golan event is just the latest "in your face" diplomatic step Trump has taken. He also recognized Jerusalem as the capital of Israel in 2017 when he moved the U.S. Embassy to Jerusalem from Tel Aviv, a step Democratic and Republican candidates routinely promise but never implement.

The 2020 reelection of Donald Trump would result in many more such perverse diplomatic steps that would further spiral down this nation into nothing less than a dictatorship of the rich riding on the ignorant prejudices of white nationalism.

This moment in the political calendar, when the Democratic National Committee is putting on a series of debates to showcase more than 20 candidates for the nomination in 2020, we have another option.

On the issue of Israel's wholesale theft of Palestinian (and Syrian land), our choice at the ballot box in November, 2020 is between Trump's "in your face" ignorant Zionist-dictated diplomacy and the 20 plus Democratic presidential candidates whose street creed is built entirely on "weasel words" designed to protect vote-seekers.

First. we need to explain how we are using "weasel words" to define political evasiveness.

With due respect to one of God's creatures, the weasel follows its instincts to survive and exist from generation to generation. A weasel does what a weasel does. If a hungry weasel enters a hen house in search of sustenance, it will steal eggs.

Related Topic(s): 2020 Elections; Israel; Jerusalem; Palestinian; Trump; Zionists; Zogby, Add Tags
Add to My Group(s)
Go To Commenting
The views expressed herein are the sole responsibility of the author and do not necessarily reflect those of this website or its editors.