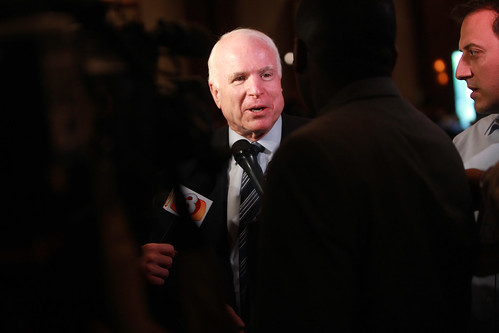 Enough time has now elapsed since the death of Senator John McCain for those of us who care deeply about world peace and deplore our nation's contribution to its absence to strongly dissent from the John McCain eulogies and instead seize this as a teachable moment on realities of American history. However traditionally respectful of the dead, the outpouring of gushing praise for Senator McCain reflects typical denials of hard truths in our retrospectives about America's brutal imperialism. Instead, as a duty of citizenship, I urge us to face these truths starting with the sacrilegious suggestion that John McCain was no hero.

McCain flew ground attack aircraft bombing helpless Vietnamese villages into oblivion. Considered a reckless and incompetent flyer who had wrecked three previous aircraft in crashes blamed by Navy investigators on poor pilot judgment, he was nevertheless allowed to continue flying. This indulgence with taxpayer assets probably owed to his lineage from a distinguished military bloodline. His father and grandfather were 4-star admirals. African-Americans have also noted his descent from a slave-owning Mississippi family.

McCain remained an unrepentant imperial warhawk corrupted by big money. Like John Kerry, he married into America's financial royalty, further enabling his political ambitions. He then used his positions of political power to aggressively support the mass killing of hundreds of thousands by our imperial war machine and its politically powerful weapons industry in repeated, flagrant violations of international law.

Offering neither acknowledgment, apology nor restitution for our war crimes in Vietnam, McCain posed instead as a war hero and exploited this invented status for political advantage. Ironically, his terminal illness coincided with Ken Burns' whitewash of the Vietnam War, preserving the mythic McCain version about this two-decade war of choice - illegal under the UN Charter - that killed three million Vietnamese.

Despite a $30 million budget, 10 years, and 18 hours of broadcast time, Burns' documentary managed to leave almost everything of crucial educational importance unmentioned. Considering its David Koch, Ford Foundation, and Bank of America sponsors, disturbing revelations would not be expected.

Burns' conspicuous omissions included the war's fomenting agents, CIA director Allen Dulles and his brother, Secretary of State John Foster Dulles, who during the Eisenhower administration chose Ho Chi Minh for elimination along with Iranian Prime Minister Mohammed Mossadegh, Guatemalan President Jacobo Arbenz Guzman, Congo Prime Minister Patrice Lumumba, and Indonesian President Sukarno (Javanese use only one name). Only Ho Chi Minh survived. This fraternal coalition destroyed the firewall between our diplomatic corps and covert military operations, a corruption and poisoning of our foreign relations that has continued to expand exponentially. Seymour Hersch recently reported on Democracy Now! that we are currently conducting covert military operations in 76 countries. Diplomatic protection is a key strategic component of such operations. For example, our ambassador posted to Syria in 2010, Robert Stephen Ford, actively encouraged and facilitated the jihaddist mercenary operations against President Assad that initiated that monstrous 7-year war, relentlessly misrepresented by Western propaganda as a civil war.

General Edward Lansdale's duplicitous, culture-divisive cancellation of the 1956 unification election, outrageous propaganda terrorizing Vietnamese Christians into fleeing south, transformation of a temporary partition of convenience into a pseudo-national boundary, and war-inflaming installation of Catholic President Diem were also left undisclosed, as were CIA station chief Ted Shackley's secret war in Laos smuggling opium to support our covert operations and his Phoenix Program of infiltration, abductions, torture, rape and assassinations "neutralizing" 82,000 suspected Viet Cong, a template for US "special operations" ever since.

This entire war deeply dishonored America, but McCain neither questioned it publicly nor expressed remorse. He knew he was bombing simple villages, not identifiable military targets, on over two dozen ground attack missions in Vietnam, Laos and Cambodia. Did he know or care who was beneath those bombs? Was he aware at the time of facts described above?

If not, did he care enough to learn these facts subsequently exposed by many historians and investigators over the next half-century? Having engaged in the worst of our war crimes - the relentless and genocidal carpet bombing of Southeast Asian communities including use of Agent Orange leaving monstrous birth defects, cancers and neurodevelopmental disorders in the surviving population ever since - did McCain not have a duty to read, learn, reflect, regret and reveal the ugly truth to the public he accepted responsibility to represent? Instead, he used his Senate position to block congressional investigation, permanently seal classified information that might refute his POW claims, and manipulate a largely incurious and racist public willing to accept dehumanization of the non-white people we killed simply to deny them free choice of their own government.

Real Vietnam War heroes were the helicopter pilot - Warrant Officer Hugh Thompson - who intervened to stop the My Lai massacre, and soldiers who rebelled, refused combat, and sabotaged our bombing campaign, documented in the film, "Sir, No Sir!" and the book, Soldiers in Revolt. These, not Ken Burns' whitewashed film or whitewashed memorials to John McCain, belong in every high school library and American history curriculum.

Related Topic(s): America; Facts; History; History Alternative; History And The Present; McCain Airplane Crashes; Mccain Warmonger; Mccain-the-coward; Mccain-the-liar; Opium; (more...) Torture; Vietnam War; Vietnam War Film, Add Tags  (less...)
Add to My Group(s)
Go To Commenting
The views expressed herein are the sole responsibility of the author and do not necessarily reflect those of this website or its editors.

STAY IN THE KNOW
If you've enjoyed this, sign up for our daily or weekly newsletter to get lots of great progressive content.
Series: "US/NATO Imperialism"