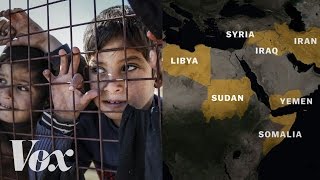 Well, yes, despite the protestations of the Trumpites to the contrary, the Ban was intended to be a Muslim Ban. Giuliani gave it away when he said that of course Christians from the Seven Countries would be exempted. Trump's xenophobic, Islamophobic base knows exactly at whom it was aimed. And so, do the far-Right acolytes like Frank Gaffney, who have their own followings. Trump wanted to make sure that they would be on board with him, about the Ban as well as other policy initiatives. And of course, the Ban had nothing to do with "security."

I, as well as numerous others, have said that Trump is a fascist, of the 21st century variety to be sure. Here is my current definition of the term, in the Trumpian context:

A politico-economic system in which the Executive Branch of the Government: regards the Constitution as in place only on paper; disregards the Judiciary as a co-equal branch of government and accepts the Legislative Branch as a co-equal only when Executive Branch policies are supported by it; demonizes and then criminalizes all political, religious, and ideological opposition to its policies and programs; redefines the words "truth," "science," "data," "fact," and "reality" through the use of the Big Lie technique; regularly uses the Doctrine of White Supremacy/racism, xenophobia in general and Islamophobia in particular, and homophobia, to achieve political ends; suppresses the free vote by challenging the legitimacy of the electoral system; casts "the media" as a principal enemy, with the aim of suppressing dissent and promoting distrust in it and its reporting; all in service of creating and maintaining the control of State Power by the economically dominant sector of the capitalist ruling class: manufacturing, fossil fuels, agriculture/food, pharma/health services, retail, transportation, and banking/investment/financial services.

And so, the Ban can be seen very much in the light of this Administration very much intending to move along the road to the eventual institution of fascism.

Stephen "non-reviewable" Miller, is a 31-32-year-old far right-winger has been on the anti-immigrant kick since his college days. His previous experience in government has been as a political flack for the likes of Michele Bachmann and Jeff Sessions. He became a front man for Trump during the campaign. These were apparently his principal qualifications for becoming a senior (sic) advisor in the White House. He was apparently the primary author of the Ban. It is too early to say whether or not he actually had in mind the possibility/probability that the Ban would meet with strong resistance in the Federal courts, and was salivating at the possibility of such a confrontation. But whether he, and Steve Bannon, set the case up precisely to get the judicial response that they did, it plays right into their hands: "We know what's best for the country, particularly when it comes to 'security,' and no court should stand in our way." Now that one has a clear 20th century fascist ring to it. They also had to know that the mainstream media would react the way that it did: with general condemnation. Furthering that confrontation that Bannon announced several weeks ago as well: all the better to serve the drive for fascism.

Then, what do fascist regimes, or regimes that want to become fascist and implement an authoritarian mode of government with Executive Branch dominance, need, at large in the population? They need a designated enemy and they need to cultivate fear. Well this one is perfectly designed to achieve those ends. Again, it is a Muslim Ban, regardless of what the Trumpites say publicly (and even regardless of what revised language that might put into the current Ban or might put into a substitute). The objective here is clearly to intensify Islamophobia at home. One can only wonder. Is a domestic Muslim Registry, which Trump did talk about for a bit on the campaign trail (here comes the yellow crescent), what is really on their agenda? "You know, it's the Muslims, both at home and abroad who are the cause of all of our troubles. Any of them might be, might become, or might harbor, a terrorist. We've got to know who and where they are." What an irony it would be if the U.S. Muslims became Trump's Jews.

And then, the cultivation and maintenance of fear. No fascist regime has ever gotten into power and remained there without it. There has not been a foreign "terrorist" attack in the United States since 9/11 (and of course the actual origins of that one are entirely uncertain ). There have been plenty of domestic ones. And of course, some of them were perpetrated by Muslims, except that they just happened to be U.S. citizens. It's the "foreign-born terrorists" about whom the fear must be generated (and who knows when the next false-flag attack might occur). (And of course domestic hate groups, of which there are hundreds , many of them potentially violent, cannot be a target. Why many of them support the Trump Agenda.) The Ban serves achieving that end perfectly.

And so, there are two ways that the Ban can be seen: either as a direct move towards fascism now or as a clear indication that making that move sometime in the not-too-distant future is exactly what the Trump-Pence Administration is in the midst of planning to do. Take your pick.

P.S.: Is an Emergency Powers Act next on the agenda, especially if there should just happen to be a "foreign terrorist attack"? After all, the Enabling Act, which gave Hitler his dictatorial powers, followed the Berlin Reichstag Fire, which indeed was a false flag attack.

Steven Jonas, MD, MPH, MS is a Professor Emeritus of Preventive Medicine at StonyBrookMedicine (NY) and author/co-author/editor/co-editor of over 35 books. In addition to his position on OpEdNews as a "Trusted Author," he is a Senior Editor, (more...)
Related Topic(s): Donald Trump; Donald Trump Cabinet; Far-right; Fascism; Fascist; Fear; Islamophobia; Muslim; Muslim Ban; Muslim Bashing; (more...) Muslim Registration; Xenophobia, Add Tags  (less...)
Add to My Group(s)
Go To Commenting
The views expressed herein are the sole responsibility of the author and do not necessarily reflect those of this website or its editors.