The largest number of victims happened near this bus stop. There were mainly babushkas (grandmothers) here, selling flowers and vegetables. They came under Grad strikes and they died."

Hero Square, not far away, also came under fire: "There was mainly youth there, students. Several people died from the blasts, including the 'Madonna of Gorlovka', Kristina Zhuk, with her infant daughter Kira."

A mural just near the main city square depicts Kristina and Kira on Bloody Sunday, rising above the plumes of smoke and the bloodbath.

Not far from the bus stop, a monument commemorates the Gorlovka victims of Ukrainian bombings and sniping from 2014-2017. Near a sculpture of an angel, over 230 names fill the marble slabs, the first dedicated solely to children, 20 of them.

We walked on to Hero Square, the tree-filled park where Kristina and Kira were killed. In its center is a monument to those who died fighting in WW2.

As we stood near a tank installed "in honor of militiamen who died defending Gorlovka against Ukrainian troops from 2014 up to this very day," we both remark on the irony: the park contains a monument to those who died fighting against Nazis in WW2, and a memorial to those killed by Ukrainian neo-Nazis from 2014 and on.

The following day, we visited the Soviet Army Square in central Gorlovka, where a ceremony was taking place marking the 76th anniversary of the liberation of Donbass from Nazis on September 8, 1943. While they commemorate the victory of decades ago, they have the memories of bombings by the Ukrainian forces in recent years. The outskirts of Gorlovka and surrounding areas continue to be shelled by Ukrainian forces. 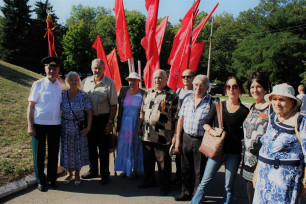 The Mayor of Gorlovka agreed to meet with me. He told me he does his best to keep people informed, via his Telegram channel, with daily updates (in Russian) on Ukrainian bombings and violations of the ceasefire agreement (the latest having come into effect on July 21). After our meeting, he opened a second Telegram channel in English.

I received permission to enter some of the areas targeted by Ukraine and did so on September 12.

Related Topic(s): Ukraine; Western Media; Western States, Add Tags
Add to My Group(s)
Go To Commenting
The views expressed herein are the sole responsibility of the author and do not necessarily reflect those of this website or its editors.