I returned there a couple years ago to see my family's old home in the weeds. I then walked down San Fernando Road, near Steve's old home, along the now-abandoned railroad tracks. Today, along those tracks that once led to the GM plant, you see a bunch of busted-up camper-trailers that the union men bought for vacations. Now they live in them. 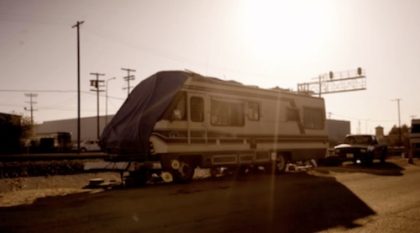 Land of opportunity? Well, tell me: Who gets those opportunities?

Some of you can, and some of you can't imagine a life in which you just weren't given a fair chance. In which the smarter you are, the more painful it gets, because you have your face pressed against the window, watching them. They got the connections to Stanford. They got the gold mine. We got the shaft.

But Steve's brain was too big to end up on the tracks. He lived in empty apartments in crappy buildings he bought, then in a barren tract house outside Reno. I laugh when they say he was "rich." He wanted to be them, to have their stuff. He got close.

It's reported that Steve was a "professional gambler." That's another laugh. He was addicted to numbing his big brain by sitting 14 hours a day in the dark in front of video poker machines. He was a loser. Have you ever met a gambler who said he was a Professional Loser?

It's fair to ask me: Why didn't I end up in a hotel room with a bump-stock AR-15 and 5,000 rounds of high velocity bullets? The truth is, it's a very fine line and lots of crazy luck that divided my path from Steve's. I credit my survival to my job, my career -- really, my obsession. As a journalist, I have vowed to hunt them down, the daddy-pampered pricks who did this to us, the grinning billionaire jackals who make a profit off the slow decomposition of the lives I grew up with.

Dear reader, please do not think for one minute that I am justifying Steve's murder spree. He slaughtered coldly, with intense cruelty, destroying lives and hundreds of families forever. If you think I'm making up some excuse for him, then I give up.

But understand this: Just like veterans of the Vietnam War who suffer from post-traumatic stress disorder even after five decades, so too losers of the class war can be driven mad by a PTSD that lingers, that gnaws away their whole lives.

Langston Hughes tried to explain it. After the Harlem riots, he wanted to tell you why people would burn down their own neighborhood:

What happens to a dream deferred?

Or does it explode?

Greg Palast's investigative reports appear in Rolling Stone, the Guardian and on BBC Television. His latest film, The Best Democracy Money Can Buy, on how Donald Trump stole the 2016 election, is available on Amazon. Palast is Patron of the Trinity (more...)
Related Topic(s): Murder; PTSD; Shooter; Stress, Add Tags
Add to My Group(s)
Go To Commenting
The views expressed herein are the sole responsibility of the author and do not necessarily reflect those of this website or its editors.